Claire Parkinson did not grow up wanting to be an earth scientist. Yet, along the way, she found herself the only woman on a research trip heading to one of the most fascinating and inhospitable locations on the planet. Almost forty years after her expedition to Antarctica, Parkinson argues that there is still much to learn. 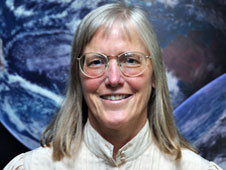 A climate scientist at NASA's Goddard Space Flight Center in Greenbelt, Md., since 1978, Parkinson has focused her research on analyzing satellite data for information about the sea ice covers of the Arctic and Antarctic and on understanding the role of sea ice in the polar climate. Her research has taken her from the frigid shores of Antarctica all the way to the Arctic. While her education in mathematics was of some help in field work, particularly for surveying and data analysis, it was what she describes as its "indirect value" that proved the most useful. "It helped instill a deep sense of thinking through problems logically," she says.

To this day, this perspective informs her approach to earth science. Parkinson adopts a humble view of this field, assuming the complexity of the Earth's system from the get-go. Speaking, for example, of her fascination with Earth's records of the past -- such as ice cores, tree rings and cave structures -- as a means of "unraveling the Earth’s history," she explains how interpretation of what these records reveal is never simple.

"We are bound to discover in the future that some of our current understandings are flawed in one way or another," she says. Yet, rather than letting this frustrate her, Parkinson views this as a scientific opportunity. "There is a great deal left for future scientists to do," she adds. 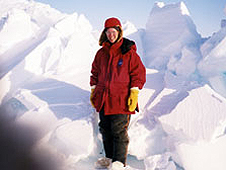 Claire Parkinson's research has taken her from the frigid shores of Antarctica all the way to the Arctic. Image Credit: Elizabeth Arnold

Many of those scientists can and should be women, Parkinson suggests, adding that there are now more opportunities for women to enter the science fields. While before it was "extremely unusual" for women to participate in polar expeditions, she notes that field research now features roughly equal numbers of men and women. Parkinson advises girls to ignore those who say mathematics and science are not for them, and instead focus on the enjoyment and value that pursuing mathematics and science can bring and on the fact that many women are recognized and respected members of the scientific community.

Parkinson urges both girls and boys to go into the science, technology, engineering and mathematics fields. "A solid STEM background," she asserts, "will open doors, allowing them to improve the human condition and the environment and to increase the understanding of the world around us."

Noting the challenges of fostering comprehension of Earth's climate and how it changes, Parkinson says that "it is important to relay concern about what humans might be doing to the climate while still getting across the reality that our understandings are quite incomplete."

Parkinson says that students' biggest challenge when it comes to understanding the climate "is to sort through the overly contentious debate on climate change and to recognize that some of the extremists on both sides are making claims that are not well grounded in the science." This is an "unfortunate situation," she says, "because learning science well is tough enough" without adding to the mix the need to parse out incorrect or exaggerated information about the topic.

Having an informed citizenry becomes even more important, she suggests, as policymakers debate and decide what steps to take to better manage our relationship with Earth's environment. Acknowledging that "our understandings are still not even close to complete," she explains, should not "paralyze us from taking action" but instead make us cautious about taking steps that could worsen the environmental issues we already face.

Parkinson lays out a clear challenge for the students who will one day take part in that decision-making process: "There is a great deal left to be learned."

Going into the STEM fields, she concludes, is a good first step to closing the gap.