Grow Text SizeShrink Text Size
Swinging for the Fence
As a teacher of incarcerated students in the Fresno County, Calif., court schools, Daniel Loewen is using science, mathematics and NASA to make a big impact on students.

"The biggest thing is how to make a difference in their lives, not just bring math and science in the classroom," Loewen said. "They're in this incredible loop of mistake-making. It just continues to roll. How do I take these kids and not only get them interested in math and science, but get them out of this situation that they're in and get them interested in something else?"

As a member of NASA's Network of Educator Astronaut Teachers, Loewen engages students in NASA research. Through NEAT, educators across the country have access to NASA workshops and content that they use in the classroom to excite kids about science, technology, engineering and mathematics. 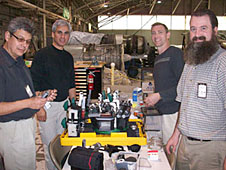 As part of his involvement in NEAT, Loewen incorporates NASA research and missions into his high school science classes at Alice Worsley School within Fresno County's juvenile detention facility.

In 2007, Loewen started an after-school NASA class to participate in NASA's Engineering Design Challenge: Lunar Plant Growth Chamber. The challenge calls on students at all grade levels to design, build and evaluate miniature greenhouses to be used on the moon. The project supports NASA's goal of attracting and retaining students in science, technology, engineering and mathematics disciplines.

Loewen's students focused their project on creating a nutrient-delivery system for plant growth chambers. Students learned about the difficulties of growing plants in a reduced-gravity environment by researching the NASA Web site and interviewing Robert Bowman, a NASA scientist. Bowman is a plant biologist at NASA's Ames Research Center in California.

"He was extremely helpful in giving us some background information in the kind of plant growth research that has already been done," Loewen said of Bowman.

Students also learned about engineering challenges from education mentor Matthew Keil and engineer Tim Pelischek at NASA's Johnson Space Center in Houston. They communicated with Bowman and Pelischek through NASA's Digital Learning Network. Through videoconferencing and live webcasts, the DLN allows students to interact with education specialists, scientists and engineers at NASA centers across the country.

Loewen and a team of educators from Alice Worsley had the opportunity to fly the students' watering system on a reduced-gravity aircraft. NASA's Reduced Gravity Student Flight Opportunity allows students to design and build an experiment and fly it on NASA's "Weightless Wonder" aircraft. By flying a parabolic arc, the aircraft enables occupants to experience short periods of microgravity. The plane makes a steep climb followed by an equally steep dive. This process is done repeatedly during the flight. 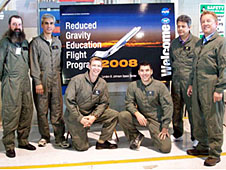 During the flight, the team was able to test how the students' watering system behaved differently in lunar gravity, Martian gravity and microgravity. Students compared the in-flight results with how the system performed on Earth.

The students observed that in reduced gravity -- whether it was one-sixth gravity like on the moon, one-third gravity like on Mars or microgravity like in Earth orbit -- the water injected into the plant growth chambers formed bubbles and didn't drain through the soil.

"You can inject water in the plant growth chamber rather easily," Loewen said. "The problem comes with draining and excess water around the roots and how to get rid of that." Excess water can cause the roots to rot. Students are continuing the project this year and researching how to drain or pull water out of the system.

Two students were allowed to represent the team at the Central California Regional Science, Mathematics and Engineering Fair, where the project won an honorable mention. "To hear their names called and to go up and get a medal was a ground-breaking event for our students personally as well as our school," Loewen said.

Working with students in the juvenile justice system can be discouraging at times, Loewen said, with high turnover and only a handful of students graduating each year. But in more than 10 years teaching in court schools, he's learned to measure success in a different way.

"Don't look at losses, look at wins," he said. "When we have those wins and we have those kids that go to college, everybody celebrates. Those are monumental events in that facility, when we're able to hand kids a diploma and provide opportunities for a scholarship."

Loewen said the plant growth project is one of those "wins." Through the project, some of Loewen's students have recognized that they are smarter than they think and they have good ideas. They have also been encouraged to look past their limitations and see college and a future outside of their current situation as a real possibility.

"The whole project lifted their spirits," he said. "Every time you walk in the classroom you swing for the fence and hope for some homeruns, and we really hit some homeruns with this project."

Loewen has increasingly used NASA content in his classroom over the past four years to encourage students to dream big and to think outside of the realm of the difficult life they've had. The plant growth challenge is helping Loewen move towards that goal.

"The project has changed students and has made significant enhancements in our school programming and contributed positively to the way our students view the world," Loewen said. "It's really broadened their horizons and given them hope."