Scott M. Smith, NASA Nutritionist
When the work of the STS-118 shuttle mission is done, the work will have just begun for Scott M. Smith, the team lead for NASA's Nutritional Biochemistry Laboratory. STS-118 will return to Earth with specimens from nutrition experiments being conducted on the International Space Station. Smith's team will use the results of those experiments to improve astronaut nutrition and prepare nutrition standards for future long-duration missions.

The Nutritional Biochemistry Lab at Johnson Space Center in Houston, Texas, is responsible for promoting astronauts' health by determining the nutritional requirements for spaceflight. The lab determines the number of calories, vitamins and nutrients needed to maintain optimum health while in space. 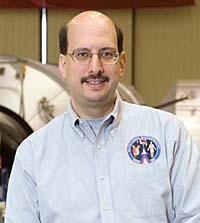 "We do essentially two types of work," Smith explained. "We do what we call operational work, which is more clinical-type assessment where we evaluate the nutritional status of crewmembers before and after flight. ... Then we also conduct research to better understand how the body reacts to flight and how nutrient needs of the body change in weightlessness."

Smith said he likes studying nutrition because it touches so many aspects of science. After receiving his bachelor's degree in biology from Penn State, he planned to go to medical school. But an elective course on nutrition and disease changed his career plans.

He completed his doctorate in nutrition at Penn State in 1990 and spent the next two years conducting research at the U.S. Department of Agriculture's Human Nutrition Research Center in North Dakota, specifically on the interactions of nutrition, physiology and the environment. He came to NASA's Nutritional Biochemistry Lab in 1992. He has been director of the lab since 1994, leading experiments, both on the ground and in space, aimed at improving astronaut nutrition.

Smith is an investigator on a ground-based experiment being conducted at the University of Texas Medical Branch in Galveston. Volunteers are put in a head-down, tilt bed rest environment for months to mimic the effects of weightlessness. The position best simulates the displacement of fluids that takes place in the body in the zero gravity environment of space. It also simulates some of the deconditioning effects, particularly on bone and muscle, that are seen during spaceflight. This particular study is evaluating artificial gravity to test how a force created by spinning a spacecraft could be used to replace gravity during long spaceflights. In the test, artificial gravity is created by spinning research subjects on a centrifuge.

Smith's team is also part of a longer-duration bed rest study, testing participants' bone, muscle, heart and circulatory systems, and nervous systems. In addition, the study will look at participants' nutritional condition and their ability to fight off infections, while in various stages of a 90-day bed rest period.

Smith is lead investigator also for a study on the vitamin D status of people spending winters at the South Pole. The South Pole sees no sunlight during winter, affecting the vitamin D production of people who live there. The production of vitamin D requires ultraviolet light. Therefore, South Pole winter residents are much like astronauts who aren’t exposed to the sun’s UV rays while in space. The study is looking at varying dosages of vitamin D supplements to see which dosage works best for preventing vitamin D depletion. Vitamin D, while long known to be important for bones, has recently been shown to be important for muscle function and other body systems as well. 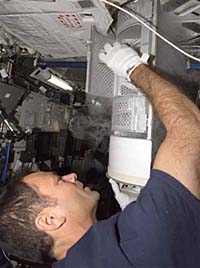 Several in-flight studies are focused on astronauts' nutritional needs for long-duration spaceflight. One in-flight experiment going on right now on the International Space Station is the Nutritional Status Assessment experiment. The assessment will help scientists better understand how changes in nutrition affect the health and performance of crews on long-duration missions. The results will impact both the definition of nutritional requirements and the development of food systems for future missions to the moon and Mars. The assessment will also consider the impact of countermeasures, such as exercise and medicine, on astronauts' nutritional status.

The Nutritional Status Assessment experiment requires collecting blood and urine samples in-flight. Current standards require all U.S. astronauts to provide blood and urine samples before and after flight. This experiment expands those standards by comparing pre- and post-flight collections with samples collected in-flight. Twelve crewmembers will participate in the three-year study. The experiment started in October 2006 with Expedition 14 commander Michael Lopez-Alegria. Blood samples drawn by Lopez-Alegria are the first collections of blood by a station crewmember in the six years people have lived on the station.

Collecting and storing blood samples in-flight was not possible until just recently, because crewmembers had no way to freeze the samples on the station. Astronauts now have the Minus-Eighty Laboratory Freezer for ISS, or MELFI, to store their samples at below-freezing temperatures until those samples can be returned to Earth.

Another in-flight experiment is a stability study testing the effect of spaceflight, particularly radiation, on nutrients in foods stored in space.

"Our concern is that, if the radiation environment in space is causing the nutrients to break down in the foods before they're eaten, for future explorations, that could be catastrophic," Smith said. "We will likely send all the food to Mars before the crew leaves Earth. ... The return vehicle is on Mars, all the food is on Mars and then we'll send the crew. That means the food is going to transit and wait on Mars for one to two years before we get there. If the crew gets there, and we find out all the vitamin C or all the folate or all the vitamin B12 has broken down in that amount of time, we've got a real problem."

For the experiment, Smith's lab sent four containers of food to the space station on the STS-121 space shuttle mission in July 2006. The packets are being brought back to Earth one at a time. One was returned on STS-121, and one will be brought down on STS-117. The other two will stay up another six to 12 months and return to Earth on future missions.

Smith said scientists learned a lot about nutrition and spaceflight in the 1990s on the Russian Mir space station and on Spacelab shuttle science missions, but there is still a lot to learn. Other areas scientists are exploring are a nutritional approach to mitigating bone loss, muscle loss, cardiovascular damage and oxygen damage to astronauts during spaceflight.

"The risks associated with nutrition tend to be duration dependent more than mission dependent," Smith said. "I'd probably be more concerned about someone living on ISS for a year than someone on the moon for six months. The longer you're exposed to a limited food system in the same environment, the more (nutritional) risks you have."

The Nutritional Biochemistry Lab is part of NASA's Human Adaptation and Countermeasures Division. The division is responsible for the biomedical research needed to understand human response to spaceflight. The division is also responsible for the development of countermeasures for negative affects to the health, safety and performance of crewmembers during or after missions.

"The Human Research Program at NASA has spent a lot of time in the last year or two to step back and take a very hard look at what do we know, what don't we know, what risks do we have and what do we need to do to take those next steps in exploration," Smith said.

NASA continues its tradition of investing in the nation's future by emphasizing three major education goals -- attracting and retaining students in science, technology, engineering and mathematics disciplines; strengthening NASA and the nation's future workforce; and engaging Americans in NASA's mission. To compete effectively for the minds, imaginations and career ambitions of America's young people, NASA is focused on supporting formal and informal educators to engage and retain students in education efforts that encourage their pursuit of disciplines needed to achieve the Vision for Space Exploration.