Michele Perchonok, Shuttle Food System Manager
Food is very important to today's astronauts. It provides them with both nutrition and a comfort from home. It's also important to Michele Perchonok. As the shuttle food system manager, Perchonok is responsible for making space food taste good and be good for the crews. 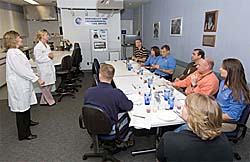 Michele Perchonok, left, works with the crew of the STS-118 shuttle mission in the food lab to develop personalized food menus for flight. Image Credit: NASA

Seven months prior to spaceflight, Perchonok works with NASA astronauts to develop personalized food menus. She conducts taste-tests with shuttle crews in the Space Food Systems Laboratory. The laboratory, located at Johnson Space Center in Houston, Texas, is responsible for preparing astronauts' meals to fly in space. The lab also researches and develops new foods and packaging that can be flown on future missions.

Recently, Perchonok worked with the STS-118 shuttle mission crewmembers to finalize their meal plans. Educator Astronaut Barbara Morgan made a request for a special food to use in educational activities she will do in space and share with students on Earth.

"She wants to do a game on orbit to teach students how to count," Perchonok said. "So we've been talking with her on what kind of bright colorful candies or other items that we could use."

Morgan may be able to use something already on the official astronaut food menu. Candy and snack foods are among more than 200 items astronauts can choose. The menu includes beverages, snacks and main entrees. While in space, astronauts eat many of the same foods they enjoy on Earth, with a few exceptions -- such as pizza. Food in space can't be refrigerated, which makes pizza one of the few foods not available during spaceflight.

"Pizza is difficult," Perchonok said. "Foods in space have to be stored at room temperature. It's difficult when you have too many components, like a pizza -- where you have the crust and sauce and the cheese. Each component requires different processing conditions."

Perchonok said some of the more common items astronauts choose are shrimp cocktail and barbecued beef brisket. "Each person is different, so we really don't have a lot of favorites," she said. "We get a lot of positive comments on our eggs. We have a variety of vegetarian items and ethnic items now. The crew basically has all things that they like."

Long-duration stays on the International Space Station have proven that variety and acceptability of food matter a lot to astronauts. "Even for the 11- and 12-day missions, variety is important," Perchonok said. To add variety, NASA food scientists develop two to three new products each year. Some of the newest space foods are chocolate pudding cake and apricot cobbler with pieces of crust.

Having served as a NASA food scientist for six years, Perchonok described the work as exciting, challenging, different and unique. "It's been the best experience and the best job," she said.

Perchonok has a bachelor's degree in chemistry and master's and doctorate degrees in food science. Before coming to NASA, she worked in the commercial food industry, and, briefly, with a NASA contractor on the development of food for the space station. 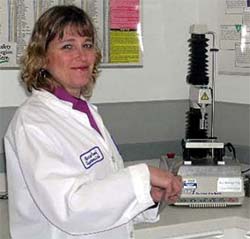 Michele Perchonok works in the food lab with a texture analyzer used in the preparation of food for spaceflight. Image Credit: NASA

In addition to working with shuttle missions, Perchonok is the Advanced Food Technology team lead. Advanced Food Technology scientists are researching food for long-duration missions to the moon and Mars. Specifically, food researchers are looking at increasing the shelf life of food by improving packaging. They are also studying the possibility of growing plants on lunar and planetary surfaces.

"Food by definition needs packaging to protect it and keep it safe, and packaging ends up being quite a contributor to trash at the end," Perchonok said. "So we're looking at food packaging that would provide us with a long shelf life, because once you go to Mars you need a five-year shelf life on food. But, at the same time, you need to try to minimize the massive volume of the packaging."

Scientists anticipate astronauts may be able to grow plants on the moon. The plants could then be used to prepare meals. "The plants may be as simple as fruits and vegetables, in which case we can either pick and eat them, or we can actually cook them or stir-fry them as a menu item," Perchonok said.

Astronauts living on lunar or planetary surfaces will need more than the current food warmer and re-hydration station to prepare fresh foods. Perchonok hopes to provide future astronauts with juicers, food processors and bread- or pasta-makers. Plants like wheat and soybeans can be processed and milled into flour and then used in the galley as food ingredients. "Then we can use the flour to make pasta, bread, cookies or breakfast cereals," she said.

The new food preparation equipment must be small, light-weight and multipurpose. One tool currently being developed will be able to do the work of three.

NASA continues its tradition of investing in the nation's future by emphasizing three major education goals -- attracting and retaining students in science, technology, engineering and mathematics disciplines; strengthening NASA and the nation's future workforce; and engaging Americans in NASA's mission. To compete effectively for the minds, imaginations and career ambitions of America's young people, NASA is focused on supporting formal and informal educators to engage and retain students in education efforts that encourage their pursuit of disciplines needed to achieve the Vision for Space Exploration.