Mary Jane Anderson, Shuttle Flight Crew Equipment Representative
Twenty-eight years ago, Mary Jane Anderson was just out of high school and a secretary for a NASA contractor. Today, she works up close and personal with NASA astronauts choosing the personal items they take into space. Anderson is the shuttle flight crew equipment representative at NASA's Johnson Space Center in Houston, Texas.

"I help the crew get ready for their flight by helping them pick out their clothing items they will be wearing in space ... and gather all their personal items they want to fly on their mission," Anderson explained.

Personal items are more than just clothes. Astronauts' personal items include everything from the shirts on their backs to the watches on their wrists to the toothpaste used to brush their teeth. Anderson even prepares the music that shuttle astronauts take into space. Crewmembers give Anderson the CDs or digital music files they want loaded on to their portable music players, and she takes care of the rest.

"You have to get very personal with the astronauts," Anderson said. "The astronauts look up to me for advice on what their special needs will be on orbit and how things work. I help them pick out shirts, monogramming, colors, et cetera. I work with them on where to purchase their items and what to buy that will comfort them."

Shortly after a flight crew is announced, Anderson meets with the shuttle astronauts to review the process for selecting crew equipment. She has a binder with photos of the clothing and accessories the astronauts may choose. Anderson said they are allowed to request items not in the catalog, but all items going into space must meet NASA guidelines. If a crewmember wants something not in the catalog, Anderson will try to get it. 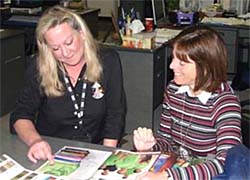 Anderson recently wrapped up equipment selections for the crewmembers of the STS-118 shuttle mission. Equipment for the STS-118 crew was packed in February in preparation for the August 2007 launch. "What's different about STS-118 is you have a lot of very experienced crew members on that flight," Anderson said. Only two of the six-member shuttle crew have never flown in space.

The amount of storage space astronauts have on the shuttle is determined by the length of the mission. Anderson said the STS-118 crewmembers are scheduled for a 14-day mission and will be allowed one and a half lockers, or approximately three cubic feet, to store their belongings. Three cubic feet is the same capacity as a small refrigerator like those used in college dormitories.

Anderson began her NASA career as a secretary for a NASA contractor in 1979. She worked her way up to her current position after supporting the agency's clothing lab in the late 1980s. She has worked with crew equipment for the last seven years. Anderson has a bachelor's degree in the management of technical operations.

Anderson said astronauts' clothing preferences include cargo pants and rugby shirts. She said crewmembers like cargo pants for the many pockets. Astronauts often wear matching rugby-style shirts with a mission logo or monogram.

Anderson sometimes helps astronauts who want to take special items, such as a flag or a CD, for the sole purpose of flying the item in space. Crewmembers often request to store small souvenir items in their personal equipment locker so they can take a photo with them.

"I always find room for them, because it means a lot to them," Anderson said.

After a mission, Anderson talks with each astronaut and finds out what went well with the equipment and what didn't go well. She uses the post-flight feedback to improve equipment selection for future missions.

Anderson hopes to work with crew equipment on future NASA programs aimed at taking humans back to the moon and beyond. "Crew Exploration Vehicle [crewmembers] are going to need clothing," Anderson said. "They're going to need equipment."

NASA continues its tradition of investing in the nation's future by emphasizing three major education goals
-- attracting and retaining students in science, technology, engineering and mathematics disciplines; strengthening NASA and the nation's future workforce; and engaging Americans in NASA's mission. To compete effectively for the minds, imaginations and career ambitions of America's young people, NASA is focused on supporting formal and informal educators to engage and retain students in education efforts that encourage their pursuit of disciplines needed to achieve the Vision for Space Exploration.