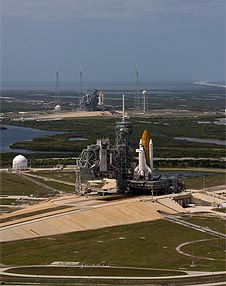 For four astronauts, the STS-400 mission presents an unusual situation.

Normally, astronauts spend their training looking forward to launch. For STS-400, the crew hopes the mission never leaves the ground.

When the space shuttle Endeavour rolled out to Launch Pad 39B for STS-400, another shuttle was already on a pad nearby.

The other shuttle, Atlantis, is waiting on Launch Pad 39A for the STS-125 mission to repair and improve the Hubble Space Telescope. Seven astronauts will upgrade the telescope’s equipment and add new astronomy tools. STS-125 is the only mission planned before the space shuttle's retirement that will not visit the International Space Station. Because of the difference in orbits, Atlantis would not even be able to rendezvous with the space station if something goes wrong.

NASA is not expecting any problems on the STS-125 mission. Recent changes have made the shuttle safer than ever. However, NASA does prepare ahead of time for any unforeseen problems that could arise during the mission.

The crew of STS-125 has been trained to deal with problems that may arise with Atlantis. The astronauts have equipment to make repairs to the shuttle while in orbit. But what happens if a problem develops that cannot be solved there? If a situation like that occurs, Endeavour and the STS-400 crew will be ready.

Atlantis' crew would be able to stay on that orbiter for about three weeks after launch if something should go wrong. Endeavour would launch within a week. Four astronauts would fly on that rescue mission.

If Endeavour launches to rescue the STS-125 crew, it would catch up with Atlantis in orbit. Endeavour would then use its robotic arm to grab Atlantis and hold the two shuttles in place. The astronauts would cross from one shuttle to the other in spacesuits. Once safely inside, all 11 astronauts would return home on Endeavour. After the two shuttles have separated, NASA would command Atlantis to fly a controlled re-entry landing with impact in a remote ocean location. Doing so would prevent the danger of its crashing on land. 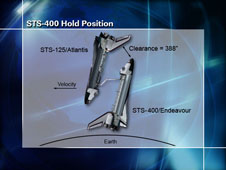 If there were a rescue mission, when Endeavour reached Atlantis, the shuttle's robotic arm would hold the two vehicles in place so the crew could cross between them. Image Credit: NASA

Astronaut Chris Ferguson is the commander of the rescue mission crew. Eric Boe is the pilot. Mission specialists are Stephen Bowen and Robert Kimbrough. These four astronauts also flew together recently on the STS-126 mission. On that mission, they delivered supplies to the International Space Station.

Even without the rescue mission, Endeavour needs to be ready for the STS-127 mission scheduled to fly about a month after STS-125. Once Atlantis is safely home, Endeavour will be moved from Pad 39B to Pad 39A to prepare for launch.

STS-400 is not the first time NASA has discussed a rescue mission. Although the space station would provide a safe harbor if something went wrong, astronauts would still need a way to return home. Another shuttle would have to prepare for a rescue mission. However, in that situation, NASA would have more time to prepare since the crew would be safe on the station. STS-400 will be the first mission where a rescue shuttle will be waiting on the pad to launch if necessary.

A similar situation happened once before, prior to the shuttle. In 1973, a problem occurred on a Skylab mission. NASA planned a rescue mission to bring that crew home from Skylab, and a rescue rocket was moved to the launch pad. However, in the end, NASA figured out how to bring the crew home safely without a rescue.

Like that rescue crew 26 years ago, the astronauts of STS-400 hope to remain grounded. However, if something does go wrong, they'll be waiting and ready.