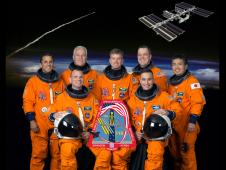 There comes a time in a young bird's life for it to spread its wings and fly.

While the 10-year-old International Space Station has been flying since the launch of its first component, it will soon finish spreading its wings

The space station draws most of its electrical power from a set of solar array wings that are mounted on a large truss that stretches out from either side of the facility. The completed truss will be longer than a football field, and the solar arrays mounted to it stretch almost a football field's length from tip to tip.

The assembly of the International Space Station's truss began in 2000, which was the year the first of its solar arrays were installed. Since then, three sets of large array wings have been installed on the space station. Now, the STS-119 crew of the space shuttle Discovery will install the space station's final truss segment and solar arrays. And the International Space Station's wings will be fully spread.

The truss segment and arrays to be installed during STS-119 -- the S6 segment -- will play an important role in the development and use of the International Space Station. Since the first crew began living aboard the space station in 2000, the maximum size of a space station crew at any one time has been three people. During 2009, however, the maximum crew size will increase to six people.

Recent shuttle flights have delivered new modules and equipment that will allow the space station to support a larger crew. The S6 arrays delivered on STS-119 will provide the electricity to fully power science experiments and support the station's expanded crew of six.

Astronaut Lee Archambault will serve as the commander of the STS-119 mission. He previously visited the space station on the STS-117 mission, which also installed a truss segment and solar arrays. Tony Antonelli will make his first spaceflight, as the mission's pilot.

Mission specialists for STS-119 will be Joseph Acaba, John Phillips, Steve Swanson and Richard Arnold. Swanson flew to the space station with Archambault on STS-117 in 2007. John Phillips lived on the space station as a member of the Expedition 11 crew for six months in 2005. He also flew on the STS-100 mission in 2001. Acaba and Arnold will be making their first spaceflights on STS-119. The two are classroom teachers who were selected as astronauts in 2004. 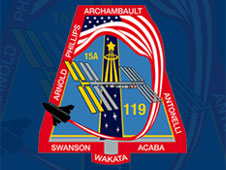 The shape of the STS-119 patch comes from the shape of a solar array viewed at an angle. The International Space Station in the center of the patch features the S6 truss in gold. Image Credit: NASA

Joining the crew for the flight to the International Space Station will be Koichi Wakata of the Japan Aerospace Exploration Agency. Wakata will remain aboard the space station as a member of the Expedition 18 crew. Space station flight engineer Sandra Magnus will return to Earth with the STS-119 crew after having lived aboard the station since November 2008.

Astronauts will conduct four spacewalks outside the space station during the mission. The spacewalkers will be Swanson, Arnold and Acaba. The astronauts will install the S6 truss segment and arrays. They will also perform maintenance work on other parts of the truss and power-generation system. The flight also will replace a failed unit for a system that converts urine to potable water.

The STS-119 mission is an important step in preparing for the future of spaceflight. NASA is currently working to carry out a long-term plan that will lead to humans' returning to the moon and beyond. Currently, NASA is working to complete the International Space Station by the time the shuttle fleet is retired in 2010. The space station serves as an important platform for learning how to live in space and will be vital to exploration as human space travel extends farther from Earth.

NASA is committed to building strategic partnerships and linkages between science, technology, engineering, and mathematics formal and informal educators. Through hands-on, interactive educational activities, NASA is engaging students, educators, families, the public and all agency stakeholders to increase scientific and technological literacy in the United States.