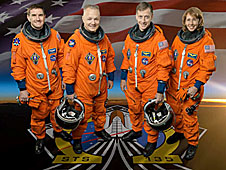 Those two words carry a great significance for the Space Shuttle Program. At the end of each shuttle landing, when the orbiter has come to rest on the runway, the commander calls mission control with those words, indicating that the mission has ended.

Those words will be spoken from the space shuttle only one more time.

At the end of the STS-135 mission of the space shuttle Atlantis, the orbiter's landing gear will stop turning; the orbiter will come to a complete stop; and Commander Chris Ferguson will call mission control and speak those two words.

And when he does, the three-decade-long space shuttle flight program will be over.

Atlantis will be the last of the orbiters to complete its mission. Named after an oceanic research vessel, Atlantis made its first flight on the 51-J mission in October 1985. After STS-135, Atlantis will have flown a total of 33 missions, which included such highlights as the launch of space probes to Venus and Jupiter, the delivery of the Destiny laboratory to the International Space Station, and the final Hubble Space Telescope servicing mission in 2009. 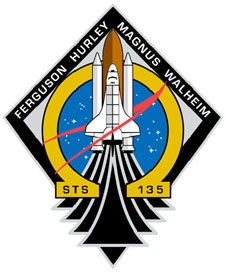 The mission patch for STS-135 includes the Greek letter omega, the last letter in that alphabet. Omega symbolizes the flight as the last mission of the Space Shuttle Program. Image Credit: NASA

Commanding Atlantis for the shuttle's final flight will be astronaut Chris Ferguson. He has visited the space station twice before, as pilot of STS-115 in 2006, and as commander of STS-126 in 2008. The mission's pilot is Douglas Hurley, who previously flew on the STS-127 mission in 2009.

Mission specialists Sandra Magnus and Rex Walheim also will be aboard Atlantis. Magnus flew on STS-112 in 2002, and then lived on the International Space Station as part of its Expedition 18 crew from November 2008 until March 2009. Walheim has visited the space station on two previous shuttle missions, STS-110 in 2002 and STS-122 in 2008. Walheim will have flown on Atlantis for all three of his trips into space.

The STS-135 mission is an important step in preparing for the future of spaceflight. NASA is working to carry out a long-term plan that will lead to human exploration of the solar system. STS-135 completes the first step of that plan with the retirement of the space shuttle and the completion of the International Space Station. The station is an important platform for learning how to live and work in space and will be vital to exploration as human space travel extends farther from Earth.

NASA is committed to building strategic partnerships and links between science, technology, engineering and mathematics formal and informal educators. Through hands-on, interactive educational activities, NASA is engaging students, educators, families, the public and all agency stakeholders to increase scientific and technological literacy in the United States.