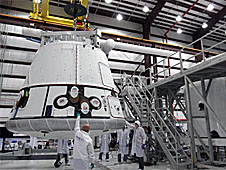 When SpaceX's Dragon capsule launches in spring 2012, a very special payload will be on board: 15 student experiments from the Student Spaceflight Experiments Program. The big deal is that those experiments from "SSEP Mission 1 to ISS" will be part of space history. Dragon will become the first commercial vehicle to dock to the International Space Station, and these student experiments have the distinction of being the only payload on board.

The launch of SpaceX's Dragon not only marks the beginning of a new approach to U.S. space access -- it clearly demonstrates that students still have an opportunity to explore in the post-shuttle era. The first two rounds of SSEP experiments were carried to the station in 2011 aboard space shuttles Endeavour and Atlantis on their final missions, STS-134 and STS-135, respectively. The set of SSEP Mission 1 experiments, called Aquarius, was originally slated to fly aboard the Soyuz 30. But in an interesting twist of fate, the experiments were re-manifested on the maiden voyage of the SpaceX Dragon. Aquarius not only becomes part of a historic first but also allows the space station to remain an out-of-this-world platform to engage students in STEM -- science, technology, engineering and mathematics. 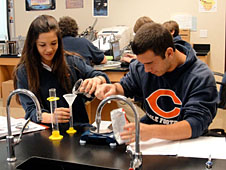 A total of 779 teams submitted proposals for the SSEP experiments. Image Credit: SSEP

The Student Spaceflight Experiments Program began in June 2010. It was launched by the National Center for Earth and Space Science Education, or NCESSE, and NanoRacks LLC, a national science, technology, engineering and mathematics education initiative. The organizations work together to give about 300 to 1,000 grade 5-14 students across a community the opportunity to design and propose real experiments to fly in low Earth orbit, first aboard the space shuttle and now on the International Space Station -- America’s newest National Laboratory.

Each participating community conducts a Flight Experiment Design Competition. Student teams compete for an experiment slot reserved just for their community in a real research mini-laboratory scheduled to fly in low Earth orbit. Additional programming leverages the flight design competition to engage the entire community through social media and through grade K-14 art and design competitions to create mission patches to accompany the selected flight experiment.

Mission 1 to the International Space Station

In response to an announcement of opportunity in July 2011, 12 communities in nine states and the District of Columbia offered a way for 41,200 students in grades 5-14 to design and propose real microgravity experiments. A total of 779 student teams submitted proposals. A formal two-step review process in fall 2011 provided for the selection of 15 flight experiments, all of which passed a formal NASA Flight Safety Review.

Bumps Along the Way, From Soyuz to Dragon 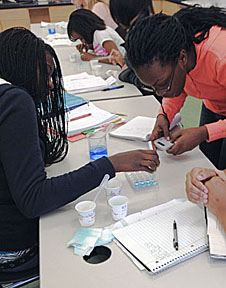 SSEP impacted the lives of students, parents, teachers and communities in nine states and the District of Columbia. Image Credit: SSEP

The process sounds simple enough, but what’s the rest of the story? Were there any bumps and bruises along the way? The biggest bump turned out to be cold air -- or lack of it. The air isn’t the type that blows in during the wintry days of January, but the kind supplied by temperature-controlled equipment. The latter sustains science experiments.

In the midst of formal selection of the SSEP Mission 1 to ISS flight experiments, NanoRacks informed NCESSE that Aquarius -- the student experiments payload -- could no longer be refrigerated during transport from Houston to Kazakhstan or during its storage at the launch site before being placed on Soyuz 30. This change had the potential to significantly impact all flight experiments because teams were designing their experiments with refrigeration in mind.

Because of the loss of refrigeration, all 12 student flight teams were asked to review their experiments carefully. The results showed that three communities would be significantly impacted. They had to identify secondary experiments that required no refrigeration and submit them. NanoRacks agreed to fly the three new experiments for these communities, in addition to their original experiments. All of this was taking place against a very fast-moving clock, where a list of all experiment fluids and solids flying needed to reach NASA toxicology at NASA’s Johnson Space Center in Houston or risk loss of flight of the experiment.

Now, 15 experiments are going to fly in Aquarius to the space station, including the three secondary flight experiments.

According to Jeff Goldstein, director of NCESSE, this whole experience is REAL science and REAL spaceflight. It is not nice and neat. It is not predictable. Often scientists need to get that roll of duct tape out to save the day. Every one of the student teams across the U.S. stepped to the plate in a big way, and we should all be incredibly proud of them.

The launch of Aquarius on Dragon is only the first of the SSEP flight opportunities to ISS. Student teams across the nation are now in the midst of experiment design for Mission 2 to ISS, with a launch in fall 2012. On April 29, 2012, NCESSE announced Mission 3 to ISS, so that schools and school districts that want to be part of this adventure can jump aboard with experiment design and launch during the 2012-2013 academic year.

In Their Own Words

The stories below were written by representatives of 11 of the 12 experiment communities. Read the participants’ own descriptions of the impact that SSEP had on the lives of many students, parents, teachers and communities. The mission patches below were selected from designs submitted by students. The patches are flying with the Aquarius experiments on SpaceX's Dragon.