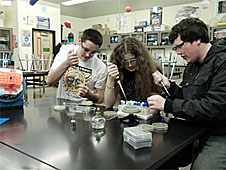 Paul, Katie and Austin prepare a new batch of E. coli samples to be grown in the centrifuge. Image Credit: SSEP

Experiment: How Does Spaceflight Alter Mutation Rate, Growth Rate, Rate of Plasmid Uptake, and Ability to Withstand Subsequent Stressors in a Bacterial Strain?

Astronomy and biotechnology students at Ballard High School in Seattle celebrated with high-fives when their experiment was selected to fly aboard the last flight of space shuttle Endeavour. When NASA launches one of the final shuttle missions, a small piece of Ballard will be blasting off with it, one of 16 school groups nationwide to do so.

Ballard astronomy teacher Eric Muhs thinks the shuttle experiment is great for Ballard's science programs. "It makes us look really smart," he joked. Ballard's experiment will launch E. coli cells into space to test for changes, such as mutations, plasmid uptake and growth rate. Responsibility for the experiment was placed squarely on the students, with little teacher input. "They've done a great job," Muhs said. "It's been super fun. It's great for students to do real science, not just read a textbook. That's why I got into science -- to do stuff, not just read how other people did it."

Developing the experiment was not only a lesson for students but also a confidence builder. "During the first meeting, a lot went over my head," said student Paul Menendez. "Once we got our main idea, I learned much more than I thought."

Students will compare standard cells to "well-traveled" cells, which will be frozen and stored for years to come. Students worked with Baliga Lab at the Institute for Systems Biology and the Washington NASA Space Grant Consortium. A group from Ballard is determined to go to Florida to watch the launch.