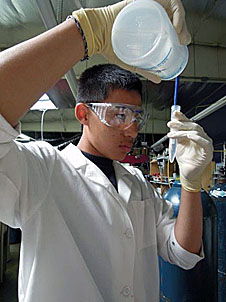 Experiment: Effect of Microgravity on the Antibacterial Resistance of P. aeruginosa

When I was asked if our students would be interested in sending a student-designed experiment into space, my immediate reply was, "Are you kidding? We're in!"

Over 100 students initially participated in the Student Spaceflight Experiments Program by contributing to nearly 25 experiments. Selecting the top three from our community was extremely difficult. The time and energy put into the research, design and initial experimentation by the student teams were tremendous. The experience of real discovery science was the reward for each participant. For those who did not participate or were not finalists, "Next year ... next time ... I'm in!" was the resounding sentiment.

Our defining moment as a community occurred soon after I received a message from the SSEP director that there was a problem. Refrigeration would no longer be available. I assembled the three finalist teams and explained the situation. They had to redesign their experiments so that they would not require refrigeration, and the students had 45 minutes to get it done. Each team huddled around each other: a few frantically researching, a few retyping protocols, a few verifying information and effects. I always tell my students, "In biology, you have three options when faced with a problem. Evolve. Migrate. Or Die." I told the groups, "Today, dying is not an option, nor is running away." With one minute to spare, each group submitted their successfully modified protocol.

"Houston, not a problem."