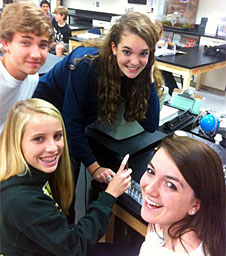 Experiment: The Effect of Microgravity on the Ability of Ethanol to Kill E. Coli

The opportunity to fly an experiment aboard a space shuttle and become part of NASA history energized the students at Maitland and Glenridge Middle Schools like a bolt of lightning. We have never witnessed so many students as completely intent on winning an academic contest as we did during the Student Spaceflight Experiments Program competition!

For at least a two-week period just before the due date for the SSEP experiment proposals, most of the students met for several hours before school began and until long after dark so that they could collaborate. At every opportunity, they begged their other teachers to allow them to work during the school day. It was exhilarating to watch groups of 11- to 14-year-olds huddled around laptops and to listen to their highly intellectual conversations.

The SSEP competition climaxed during an evening Science Open House event. The Central Florida Astronomical Society brought telescopes to set up in our school courtyard. Our mathematics and science departments set up various activities and displays, but the focus of the evening's festivities was our students' SSEP experiment proposals that were presented on display boards. Judging had taken place previously, and three school finalists were announced.

Our school community was thrilled for the group whose experiment was finally selected for spaceflight. When Endeavour launches, all of us will feel that a bit of our hearts are flying with it.