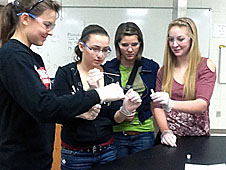 What do brine shrimp, strawberry plants, copper sulfate crystals and DNA have in common? They all were the topics of experiments on microgravity researched by students as part of the Student Spaceflight Experiment Program, or SSEP.

Over the course of the 2011-2012 school year, Nebraska students attending Norris High School in Norris and Pleasanton Public School in Pleasanton researched, designed and competed with one goal in mind -- to have the opportunity to send their research experiment studying the effect of microgravity to the International Space Station. The ultimate dream came true for a talented group of advanced biology students from Norris. These young scientists eagerly await the launch of the Aquarius payload aboard SpaceX's Falcon 9 rocket. Although only one experiment from these schools will fly to the International Space Station, the journey has impacted everyone involved.

Throughout the SSEP experience, student researchers were provided the opportunity to truly become scientists. It all began with an exploration into what microgravity really is. As the abstract concept of microgravity began to take shape in the minds of the students, the fluid mixture enclosures, or FME, mini-labs that would house their microgravity experiment arrived! The physical presence of the FME mini-labs helped to solidify in the students’ minds that this space adventure was really going to happen. Area researchers and scientists provided guidance and shared research tips and techniques. Students discovered that they actually learned throughout their journey and that their most important tool was a willingness to question and explore.

We would like to thank the NASA Nebraska Space Grant Consortium and the Sherwood Foundation for making this program possible for hundreds of students in Pleasanton and Norris, Neb.