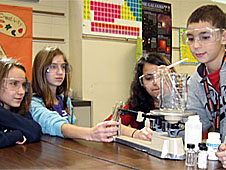 Experiment: Efficiency of Microencapsulation in Microgravity as Compared to Gravity

The imagination of Lincolnwood School District 74 students definitely was captured when they learned they could send an experiment into space through the Student Spaceflight Experiments Program. This project opened doors for the students to work with amazing scientific mentors. Students learned about the questions and problems tackled by scientists in their fields. After the experiment proposals were completed, Dom, a sixth-grader said, "I never realized until now that being a scientist takes lots of long hours of research and determination. But when you look back on your accomplishments, it makes it all worth it."

Brandon, a sixth-grader whose proposal was chosen, said, "It feels amazing to know I have an experiment going into space. It was very exciting to have this opportunity." Sharon Churchwell, Brandon's teacher, said, "Brandon's parents and I definitely noticed the light of excitement in his eyes as he worked on this project. I have never seen a child say, 'Wow, this is so COOL!' while tackling a really difficult math calculation with such energy and passion."

Mrugami, a seventh-grader, had a coast-to-coast conference call with mentors and learned that her experiment would need drastic changes. Her mentors encouraged her passion, and as a result Mrugami visited the independent science research class at the district's high school.

The minute size of the experiment container was amazing to all. The students struggled just putting water into it! The proposal participants were enriched by this interaction with real-world science.