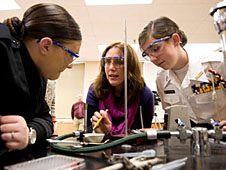 Experiment: The Effect of Microgravity on the Viability of Lactobacillus GG

By four o'clock, school has been over for nearly two hours at The Academy @ Shawnee in Louisville, Ky. And yet, voices echo against the dark brick and tall windows of the long, pre-Depression-era hallway. The voices, clearly those of students, suddenly burst out into laughter. They are speaking excitedly. A few words come through clearly: serial dilutions, colony count, experimental control. Unlikely as it may seem, these students are in fact discussing ... science.

What could gather these seven students together, on afternoons and weekends, to do what could be considered schoolwork? What could incite them to spend hours researching the bacterium lactobacillus, its role in human digestion and the possibility of culturing it in microgravity? The idea that propels these students is the same idea that has captured every imagination at one point or another since the dawn of the Space Age. Thanks to the Student Spaceflight Experiments Program, these students have space on the brain. 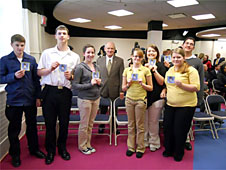 Astronaut Norm Thagard presented the students with a custom patch at the opening of the Challenger Center at Shawnee. Image Credit: SSEP

The skies are part of the DNA here at Shawnee, home of Jefferson County Schools' Flight Magnet program. A fenced-in yard behind the school holds partially disassembled planes, and flight students study weather patterns and flight laws as they prepare to be pilots. The school also houses the Challenger Center, a new, detailed, space mission simulator.

The students are used to all of this but still are thrilled that their experiment will travel to outer space. It's a trip they all wish they could make for themselves. But, for now, sending their idea to the stars is enough.