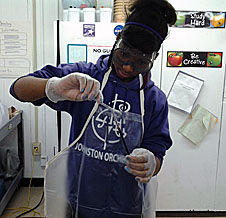 Experiments: Hepatocyte Development in Bioscaffolds infused with TGFB3 in Microgravity and Will Vitamin C Help Preserve Bone Density in Microgravity?

Houston is one of the world's major homes to spaceflight. We are home to the astronaut corps and many of the leading spaceflight technology companies working toward further exploration. We are home to vital research, resources and innovations. We also are home to many of our future space scientists, engineers, biologists and, yes, astronauts!

As part of the Student Spaceflight Experiments Program, or SSEP, Mission 1 to the International Space Station, 267 potential future space explorers completed scientific proposals for microgravity experimentation. The 267 kids -- 14 years old and younger -- delved into the possibility of making space travel easier, more viable and more likely. These students conferred with researchers from local universities, medical research facilities, NASA's Johnson Space Center, the National Space Biomedical Research Institute, Pfizer, you name it! They became familiar with the risks and limitations of space travel as well as its infinite possibilities, and they proposed their own experiments in hope of helping future space exploration!

Our winning experiments are both designed to prolong human endurance in space -- from maintaining bone density to regenerating joints. We fervently hope that our little endeavor will help our world expand further to the far reaches of human possibility!