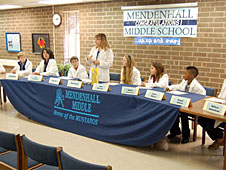 Students from sixth, seventh and eighth grades at Mendenhall Middle in Greensboro, N.C., worked as a team to write a proposal for the Student Spaceflight Experiments Program. They held an event at their school to explain their brine shrimp experiment. Image Credit: SSEP

Alex, an eighth-grader at Mendenhall Middle School in Greensboro, N.C., was confident that brine shrimp would be the key to winning his school a research spot on space shuttle Endeavour, even if his teacher and classmates initially dismissed the idea. But in the end, Alex's scientific instinct was right, and he and his eight classmates will use brine shrimp to test what effect gravity has on the growth of organisms through the Student Spaceflight Experiments Program.

The Mendenhall students won a contest held by Guilford County Schools' five Northern Region middle schools for the opportunity to test their experiment in space. They met after school with science teacher Lenny Sue French to create experiment proposals.

"It was a lot of hard work but a really positive experience for them," said French. "They meshed together and truly made a team. Seeing how scientists do their work really inspired them."

Guilford County Schools hopes this experience will let the students see what it is like to work like professional scientists and to envision future careers. 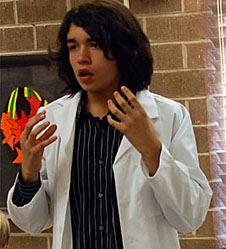 "The opportunity to work with others that enjoy science as much as I do was great," said Alex. "It opened my eyes to how the scientific method is used in real life. This has shown me that if you work as a team and bounce ideas off each other, you can accomplish anything."