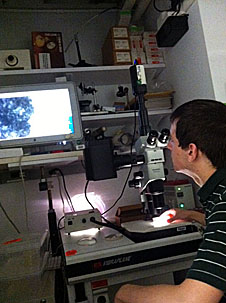 A high school student from Maryland researches nematodes in a laboratory for his experiment selected to go on Mission 1 to the International Space Station. Image Credit: SSEP

Science experiments at Henry E. Lackey High School are out-of-this-world. For the second consecutive year, an experiment created by a junior at Lackey is headed for outer space through the national science, technology, engineering and mathematics, or STEM, program called the Student Spaceflight Experiments Program.

Students nationwide enter experiments for SSEP. The winning experiments for 2012 will fly on the first commercial spacecraft, SpaceX's Dragon capsule, to the International Space Station.

In October, teachers and students in grades 5-12 from Charles County, Md., were asked to develop proposals for experiments covering a diverse range of fields, including the effects of microgravity on cement and rotting fruit. The excitement of participating in a historic event did not waiver from last year. Students and teachers eagerly began planning and designing their experiments.

Paul, a member of Henry E. Lackey High School's space-bound experiment team in 2011, created this year's winning experiment for Charles County. It explores the effects of microgravity and radiation on nematodes.

Paul has been a participant of the Student Spaceflight Experiments Program for two years now and can't think of another experience that has changed him as much as SSEP has. Paul says, "I've been given the chance to work alongside real scientists, not as an intern or assistant, but as an actual scientist. The experiments I've worked on have helped improve my academics and my work ethic. I'm learning a lot of new things and gaining a lot of new experience." His involvement with SSEP has given him, as a high school student, the chance to do something he wouldn't have been able to do otherwise for years -- real research with real scientists in a real lab with real-world applications. Paul says this has been an amazing experience, one that he will never forget.

Both flight opportunities for Charles County Public Schools were made possible by the Maryland Space Grant Consortium.