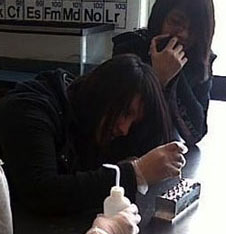 Experiment: Does the radiation exposure affect seed germination without the protection of the ozone layer?

During September 2010, the students of Tse Bit'Ai Middle School in the Pre-AP eighth-grade science class brainstormed on what type of project they wanted to design. Altogether, there were 50 students with different ideas, and they all wanted to be involved. They had a number of ideas such as sending fluids with varying densities, seeds with different germination times, radiation readings and magnets. After reading Student Spaceflight Experiments Program requirements, the students wanted to send seeds to space, but they wanted to use flower seeds. After reading about which seeds they could actually use, they chose radish seeds. They decided as a group to plant the radish seeds to get more accurate data with more plants, rather than just a few. They each wanted to have an opportunity to see how seeds that were germinated on Earth grow compared to the seeds that were germinated in space.

The student team was excited when they heard that their proposal had been chosen. The students also were excited that 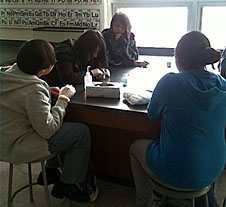 they had the opportunity to set up the seeds and the distilled water the same way they will be set up in space. The students now are waiting anxiously for the space experiment to be completed, so they can compare their experiment results.