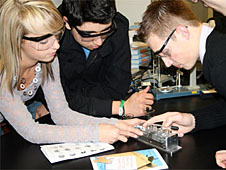 When a project designed by a seasoned science fair winner, a biology whiz and a young Renaissance man was selected to fly aboard space shuttle Endeavour, former U.S. senator and space shuttle Discovery payload specialist Jake Garn, R-Utah, wasted no time in extending his congratulations.

Mere hours after the 11th-graders from Canyons School District, Utah, privately learned that their project had been chosen by the Student Spaceflight Experiments Program, Garn arrived at their school, Hillcrest High, to applaud and inspire them and their peers at a public announcement.

"It's a very impressive achievement," Garn said, "when out of such a small number of selectees, they are going to have that incredible opportunity and honor."

Students Nikos, Megan and Keltson were awed by the visit from Garn, who flew aboard Discovery in1985. They eagerly await the launch of Endeavour, which is slated to carry their SSEP project, "Microgravity's Effects on Morphagens in Common Species." The project will examine the effect of microgravity on frog embryos. Also, Keltson's graphic design was selected from 104 submissions to be the emblem to accompany the project on Endeavour. The judges made their choice without knowing they were picking artwork by one of the students responsible for the experiment.

Since the project selection, the teens have appeared in Utah's major daily newspapers, the San Francisco Examiner, Education Week's Teacher Magazine, broadcast news and a live talk radio show. "The overall theme of this is about education: staying in school, getting educated and approaching problems scientifically," teacher Jonathan Miller told Fox 13 News. On that note, the Endeavour payload is the ultimate payoff.