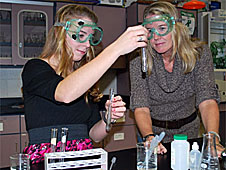 High school students conducted research and prepared to demonstrate their proposals as shown by Denise, a senior, and her biology teacher. Image Credit: SSEP

Experiment: The Development of Fish Eggs in Space

This past fall, students throughout the Ballston Spa Central School District participated in experimental research. They gained valuable 21st-century skills as a result of their involvement in the Student Spaceflight Experiments Program. The students learned about and researched a range of topics including seed germination, bacteria growth and the effect of microgravity on bones.

Teams of students submitted over 70 proposals for a chance to have their experiment launched on space shuttle Endeavour. Denise, a 12th-grade student and one of the finalists, indicated that the program was "an excellent opportunity to learn proper scientific procedures."

The experiment by Kate, Jordyn and Dana, a team of fifth-graders, proposed to test the development of fish eggs in space. The fifth-graders worked "really hard" on their proposal and they were ecstatic that it was selected as the experiment to be 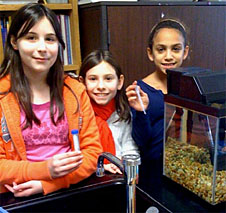 conducted in space on Endeavour. When the team was told that their experiment would be going into space, they "screamed loud." The team has had many interviews, which were a bit "scary" at the beginning. But the interviews have created broader community awareness about the program. As the team worked to prepare their samples, they networked with suppliers and scientists around the country. In the process, the students learned a lot more about aquaculture, including the need to change the type of egg from minnow to tilapia. As team member Kate summed this experience up, "Our life has changed!"