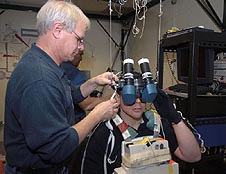 David Homan assists STS-123 mission specialist Robert Behnken in using virtual reality hardware to rehearse some of his duties for a mission to the International Space Station. Image Credit: NASA

Nothing on Earth is like stepping outside of a spacecraft to perform a spacewalk. But astronauts do have ways to prepare for the experience of extravehicular activity. David Homan is involved in one of those training methods -- practicing spacewalk tasks in an ultra-realistic virtual reality environment.

What is your job, and how do you support spacewalks?
I manage the virtual reality lab. Our facility uses computer graphics, head-mounted displays, data gloves and haptic-feedback devices. Haptic technology provides a "touch" response to actions. Together, all four of these simulate the look and feel of doing a spacewalk around the International Space Station and the space shuttle orbiter.

All of the space station and orbiter structures are graphically presented in the virtual reality helmets worn by the spacewalking astronauts. The structures are also displayed on video screens that simulate the actual camera views that crew members inside the space station or space shuttle would have. These views allow crew members to monitor the spacewalk activities as they would in orbit.

Also simulated in the facility are the various robotic arms on the station and shuttle. These robotic arm simulations are integrated into the overall simulation such that a spacewalking crew member, virtually attached to the end of the arm, actually sees the effect of the arm's motion in his head-mounted display. The reverse is also true. Crew members operating the arm see, via their monitors, the movement of not only the robotic arm, but also the motions of the spacewalking crew members.

Since the "virtual" world is not limited by the size or location of the space vehicles, the entire space station configuration can be displayed on the monitors and on the head-mounted displays. This display allows all crew members to see exactly what they would expect to see while working together in space. Astronauts will not only see a simulated space station but also Earth 220 miles below.

An extravehicular activity, or EVA, crew member can move around the simulated space station by "grabbing" handrails that are located on the structure. This effect is done using data gloves worn by the crew member and integrated into the simulation.

The virtual reality lab also provides the flight simulator for the SAFER unit. SAFER stands for Simplified Aid For EVA Rescue. The SAFER is a small jet backpack worn by all spacewalkers wearing U.S. spacesuits while they are working outside the space station. The unit provides a spacewalker with the capability to fly back to the space station should he or she become untethered and float away from the station. With a real hand controller for control and the head-mounted display to view the space station as it appears in space, the spacewalker can practice flying the SAFER unit just like airplane pilots practice flying airplanes in ground-based simulators.

The virtual reality lab also supports actual spacewalks that take place on either the station or the shuttle. The same software used in the training facilities on the ground is also used on the laptop computers on the station. The crews in space use the software to review upcoming spacewalks and robotic arm operations before actually performing the tasks. The program is also used on board during robotic operations to provide the arm operator a situational awareness view of the arm while it is in motion. The graphic arms in the program are driven by "real" data from the "real" arms during actual operations to provide the operator with a synthetic bird's-eye view of what's happening outside the station. New configuration data can be developed on the ground and uplinked to the computers on board the station at anytime to make sure the crews have the latest station configuration at all times.

Why is this element of spacewalk support important?
Training in the virtual reality lab gives the spacewalking crew members a chance to see and interact with the actual space station configuration they will be working around on their particular flight. Virtual reality training allows the spacewalkers and the arm operators to practice together in and around the "actual" station and shuttle configurations they will be working. They can determine and practice what and how to give commands before flight so that no confusion occurs during the actual in-flight operations. Spacewalkers can safely practice "dangerous" events such as self-rescue techniques using the SAFER units. Spacewalkers and arm operators can familiarize themselves with the actual configuration that the space station will be in during their particular mission, no matter how far off into the future that may be.

How did you get your current position?
I would have to say that I got my current position by default, since there was no one doing this before me. I lead the small group of people that created this capability in 1992 to support training for the first Hubble Space Telescope Servicing Mission, STS-61. And when I say small group, I mean me and one other person. Over the years it has grown to four people who develop and support crew training in the virtual reality lab.

Were you involved with NASA as a student in high school or college, and, if so, in what projects were you involved?
I was a co-op student when I was in college. I started working at NASA's Dryden Flight Research Center in 1969 and transferred to NASA's Johnson Space Center in 1974 following graduation.

What are the challenges your team faces in working with this aspect of spacewalks?
I see two big challenges that we face: being accurate and faithful to the actual space station and space shuttle configurations that we create, and matching the "desires" of our customers -- the astronauts -- with the actual capabilities and limitations of the virtual reality hardware and software at any given time.

As NASA prepares to go back to the moon, what changes will be needed for this aspect of spacewalk support?
Since what we provide is all graphics-based, preparing for the moon will for the most part just mean building different graphic models. One big challenge ahead is moving around in the "virtual world" of the moon. Moving in microgravity on the station is quite easy to simulate in virtual reality since a crew member is either moving around hand-over-hand or is being moved around while standing on the end of one of the arms. In either case, the subject can accomplish this without ever moving from the chair he or she is seated in and the motions are still natural. However, on the moon, spacewalkers will actually be "walking" for long distances. Walking around without "really" going any place will be challenging to accomplish realistically.

What else would you want to tell people about your job or your experiences with spacewalk support?
The most satisfying part of my job is interacting with the astronauts and providing a unique capability that I feel confident in saying is actually value added to the program and that we are the only people in the world that can do what we do. I think that the crew members that pass through the virtual reality lab during training are genuinely impressed with what our small group can do.