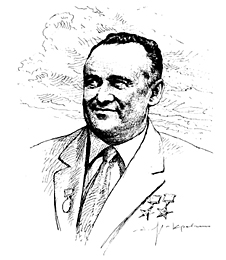 Sergei P. Korolev (1906-1966) was trained in aeronautical engineering at the Kiev Polytechnic Institute and, after receiving a secondary education, co-founded the Moscow rocketry organization GIRD (Gruppa Isutcheniya Reaktivnovo Dvisheniya, Group for Investigation of Reactive Motion). Like the VfR (Verein fuer Raumschiiffahrt, Society for Spaceship Travel) in Germany, and Robert H. Goddard in the United States, the Russian organizations were by the early 1930s testing liquid-fueled rockets of increasing size.

In Russia, GIRD lasted only two years before the military, seeing the potential of rockets, replaced it with the RNII (Reaction Propulsion Scientific Research Institute). RNII developed a series of rocket-propelled missiles and gliders during the 1930s, culminating in Korolev's RP-318, Russia's first rocket-propelled aircraft. Before the aircraft could make a rocket-propelled flight, however, Korolev and other aerospace engineers were thrown into the Soviet prison system in 1937-1938 during the peak of Stalin's purges. Korolev at first spent months in transit on the Trans-Siberian railway and on a prison vessel at Magadan. This was followed by a year in the Kolyma gold mines, the most dreaded part of the Gulag. Stalin soon recognized the importance of aeronautical engineers in preparing for the impending war with Hitler, however, and retrieved from incarceration Korolev and other technical personnel that could help the Red Army by developing new weapons. A system of sharashkas (prison design bureaus) was set up to exploit the jailed talent. Korolev was saved by the intervention of senior aircraft designer Sergei Tupolev, himself a prisoner, who requested his services in the TsKB-39 sharashka.

Following the war, Korolev was released from prison and appointed Chief Constructor for development of a long-range ballistic missile. By April 1, 1953, as Korolev was preparing for the first launch of the R-11 rocket, he received approval from the Council of Ministers for development of the world's first intercontinental ballistic missile (ICBM), the R-7. To concentrate on development of the R-7, Korolev's other projects were spun off to a new design bureau in Dnepropetrovsk headed by Korolev's assistant, Mikhail Kuzmich Yangel. This was the first of several design bureaus, some later competing with Korolev's, that would spin off once Korolev had perfected a new technology. It was Korolev's R-7 ICBM that launched Sputnik 1 on Oct. 4, 1957. This launch served to galvanize American concern about the capability of the Soviet Union to attack the United States with nuclear weapons using ballistic missiles.

During the early 1960s, Korolev campaigned to send a Soviet cosmonaut to the moon. Following the initial reconnaissance of the moon by Lunas 1, 2, and 3, Korolev established three largely independent efforts aimed at achieving a Soviet lunar landing before the Americans. The first objective, met by Vostok and Voskhod, was to prove that human spaceflight was possible. The second objective was to develop lunar vehicles which would soft-land on the moon's surface to insure that a cosmonaut would not sink into the dust accumulated by four billion years of meteorite impacts. The third objective, and the most difficult to achieve, was to develop a huge booster to send cosmonauts to the moon. His design bureau began work on the N-1 launch vehicle, a counterpart to the American Saturn V, beginning in 1962. This rocket was to be capable of launching a maximum of 110,000 pounds into low Earth orbit. Although the project continued until 1971 before cancellation, the N-1 never made a successful flight.