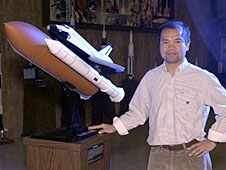 Many direct benefits of NASA's efforts are obvious. When astronauts conduct scientific research in orbit or space probes send back amazing images of other worlds, for example, the connection to NASA is clear.

But many indirect benefits from NASA's work may be less obvious. The agency's research and development frequently produces knowledge that has applications beyond the scope of NASA's mission. NASA shares this knowledge with outside organizations that often apply it to products that NASA refers to as "spin-offs," many of which are used in normal, day-to-day life.

The same thing happens with NASA's education efforts. The agency supports students and educators of science, technology, engineering and mathematics in order to help prepare its future workforce. Just as with the agency's research and development, these education efforts can have indirect benefits as well, inspiring a technical workforce that does not work for NASA but applies its talents to other challenges.

NASA engineer Bruce Vu's background is itself an inspirational story. Vu was born in Vietnam in 1962 and came to the United States as a refugee in 1980. He had escaped from Vietnam and, after a weeks-long journey in the South China Sea with little food or water, ended up in a refugee camp in Indonesia. After a six-month stay in the camp, he traveled to America. 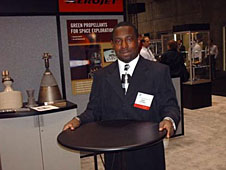 In 2001, Vu was selected for the NASA Administrator's Fellowship Project. The fellowship is designed to enhance science, technology, engineering and mathematics education at minority institutions. NAFP supports NASA's goal of strengthening NASA's and the nation's future workforce.

NAFP has two parts. Fellowships for faculty members at minority institutions involve faculty members in NASA-related research and facilities. That involvement allows the participants to build relationships and gain valuable experience. More importantly in Vu's case, NAFP offers fellowships for NASA employees to teach or conduct research at minority institutions. The NASA employee gains experience, and the institution benefits from the employee's knowledge.

During his fellowship, Vu taught courses at Alabama A&M University in Huntsville and conducted research with Boeing at the U.S. Army's Redstone Arsenal (on which the Marshall center is located) and at NASA's Kennedy Space Center in Florida.

After completing his participation in NAFP, Vu transferred from Marshall to Kennedy. He continued to be involved in NASA education efforts. He spoke to high school students about engineering careers. He encouraged a professor from Morgan State University in Maryland to become involved in the fellowship project. Vu initiated a collaboration between Kennedy Space Center and an Alabama A&M professor. In 2004, he agreed to a request from Kennedy's deputy director to host a summer graduate student. That student was Haile Lindsay.

Lindsay, a North Carolina native who earned his bachelor's and master's degrees in mechanical engineering at North Carolina A&T State University, was an intern at Kennedy. During his internship, he worked with Vu on predicting the launch-induced environments. One of the major issues that NASA is currently dealing with is the adverse environments created by rocket exhaust plumes. These environments pose a potential threat to weaken structures or even cause them to fail if insufficiently designed. Therefore, predicting these environments is critical in specifying structural design requirements to ensure overall structural integrity and flight safety.

After his summer at Kennedy, Lindsay continued his studies. In 2007, he completed his dissertation on applications of lasers in cancer therapy and earned his doctorate in mechanical engineering from North Carolina A&T.

For some NASA interns, this would be the point where their NASA connection would lead them to join the NASA workforce, taking a job working on next-generation spacecraft or aeronautics technology or the like. But that wasn’t the case for Lindsay. Instead, he will use the technical background he gained at NASA to help address one of the nation’s biggest issues -- energy production. Lindsay has taken a job reviewing power plant proposals with the Nuclear Regulatory Commission.

Lindsay said his involvement at NASA was a great opportunity for him, both professionally and personally. "You bump elbows with some of the smartest people in the world in the realm of not just aerospace and aeronautics, but in the realm of science, math and technology," he said. "Being able to work with people of this caliber only strengthens you as an engineer, a researcher and an overall human being."