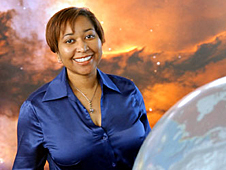 Beth Brown's first look through a telescope was all it took to set the Virginia native on track to becoming a NASA astrophysicist. Astrophysicists use physics to study objects in space, such as stars, supernovae and black holes.

Brown was a student in high school when she got her first look at the universe. She was involved in an astronomy activity that enabled students to visit an observatory to look through a telescope at the Ring Nebula, one of the best examples of a planetary nebula and a favorite of astronomers.

"I thought that was just so cool, to know that I was looking at something that was so unfathomable in terms of distance," Brown recalled.

Seeing astronomical phenomena like the Ring Nebula through a telescope made Brown want to see stars up close and to become an astronaut.

To make her dream of reaching the stars come true, she studied physics and astronomy in college. She went to school at Howard University in Washington, D.C., earning a bachelor's degree in astrophysics in 1991. She pursued advanced degrees and earned a master's degree in 1994 and a doctorate in 1998. She is the first African-American woman to obtain a doctorate in astronomy from the Department of Astronomy at the University of Michigan.

Brown participated in several NASA student projects while pursuing her degrees. She worked two summers as an intern at NASA's Goddard Space Flight Center in Greenbelt, Md., and conducted research related to or directly involved in NASA programs through the agency's Graduate Student Researchers Project.

During her time at Michigan, Brown discovered she enjoyed sharing her enthusiasm for astronomy with others, especially students. She had opportunities to share this excitement while working part-time at the school's planetarium. Brown said she enjoyed telling visitors what they could see in the night sky. She also helped create a one-credit short course in naked-eye astronomy -- what people can see with their eyes or binoculars -- for students new to the field. The course is still offered today, nearly 10 years after it was created.

Why is Brown so excited to tell people what they're looking at when they see "twinkles" in the sky? "So they have a connection to the physical universe we live in," she said. "Our ancestors used to depend on looking up at the night sky, but we don't look up anymore. I want them to know there are fascinating things in the night sky and understand what they see. I want to translate my wonder of the night sky to others." 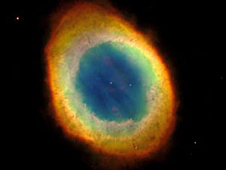 Viewing the Ring Nebula through a telescope got Beth Brown "hooked on" stars. This image of the Ring Nebula was taken by NASA's Hubble Space Telescope. Image Credit: NASA

Brown continues to share her fascination with the stars with students and others today. After graduate school, she returned to Goddard as a research associate. At the end of her research position, Brown joined Goddard's team of astrophysicists full-time.

In her role as a NASA astrophysicist, Brown has had several opportunities to share her love of the stars with others. She has been interviewed by television news reporters about astronomical events like solar eclipses. She also managed the development of a Web site for a NASA outreach project that is exploring the Milky Way galaxy.

Currently, she is focused on sharing astronomy with students. Brown was selected in 2006 to participate in the NASA Administrator's Fellowship Project, a professional development opportunity for NASA employees to teach and conduct research at minority institutions. The project also offers professional development opportunities to faculty who teach in the fields of science, technology, engineering and mathematics at minority institutions. The project supports NASA's goal of strengthening the agency's and the nation's future workforce.

Through the project, Brown was able to return to her alma mater, Howard University. "It sounded like a great opportunity, so I pursued it," Brown said. "One of the things I wanted to accomplish was to give back to Howard University, because that was my undergraduate alma mater, and to experience academic life and teach."

Brown worked with the head of the Howard's Department of Physics and Astronomy to create a series of lectures used to start an introductory astronomy course. She also made recommendations for possible future uses of the university's planetarium.

She had the opportunity to do research too. As an undergraduate, Brown researched black holes, and during her fellowship she was able to reconnect with her college mentor and continue that research. "It was interesting to work with him now as a colleague versus a student," Brown said. "I had not done research on black holes since I was an undergrad, so it was coming back kind of full circle to research I started then."

Currently in her second year as a NASA fellow, Brown has continued the black hole research while moving into a role developing and evaluating education projects at NASA's Office of Education. Her work for Education has included overseeing a group of higher education institutions piloting a new education project; developing a request for a pre- and in-service teacher certificate project; and organizing NASA participation in education initiatives outside of NASA.

Brown was once inspired to be an astronaut. Since then, her education and experiences at NASA have shown her a new way to view the stars, through the observatories in space. Her desire to look up has also been an inspiration for the next generation to consider following in her footsteps to pursue a career in discovering the mysteries of the universe.