Grow Text SizeShrink Text Size
On Air in Midair
Last season and again this season, thousands of Nebraska Huskers football fans got a big glance on the big screen into NASA's Reduced Gravity Flight Program. A video of University of Nebraska-Lincoln students participating in NASA's Microgravity University aired during several home football games, telling Huskers fans about the NASA project and the university's engineering program. The video also has been used as a recruiting tool by the university's College of Engineering.

In the video, students are seen floating in weightlessness, working on their experiment, and commenting on the program. Nebraska mechanical engineering student Brett Schlueter describes the weightless flight as "the best roller coaster I've ever been on."

"On top of all of that, (I gained) real-world experience and leadership experience," Schlueter added.

In 2009, two student teams from the University of Nebraska-Lincoln -- Team PoweRED Up and Team FAST -- participated in NASA's Reduced Gravity Student Flight Opportunities Program, also known as Microgravity University. The project is part of the Reduced Gravity Flight Program at NASA's Johnson Space Center in Houston, Texas. It offers undergraduate students the opportunity to propose, design, fabricate and fly experiments on a special reduced-gravity aircraft. The airplane makes a series of steep climbs followed by steep dives, called parabolic arcs, resulting in short periods of microgravity. The airplane also flies patterns to simulate lunar and Martian gravity. The project supports NASA's goal of strengthening the agency's and the nation's future workforce.

Schlueter was team lead for Team FAST, which created an experiment to test the flow rates of several soils under lunar gravity conditions. Students placed soils in a clear plastic hopper assembly and flipped it multiple times during flight, like an egg timer, Schlueter explained. Students then observed the movement of the soils.

"It was unbelievable to observe how slow the soils fell through our hoppers," Schlueter said. "It didn't look real after being used to seeing several 1-g tests in our lab. It was also a challenge to make sure we got sufficient data during the short 20-second parabolas, but it also was very rewarding to understand the importance of having a good game plan before the flight." 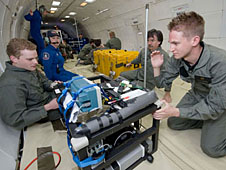 For the most part, Schlueter said, the experiment was successful. However, the high humidity in the Houston area may have affected some of their results adversely. "Overall, though, our experiment proved to be a good design. With a few small changes, we believe we could have achieved much better results. Hopefully sometime in the future, either another UNL team or a team from another university can adapt our design to continue the ongoing lunar soil research."

Students on reduced-gravity flights often do simple demonstrations of how common objects behave differently in reduced gravity. During one of the parabolas, Schlueter tossed a couple of small magnets into the air to see what the magnets would do. "The first time I tried it, I gave them too much of a throw, and they almost hit the ceiling of the aircraft," Schlueter said. "It was just amazing how slow they fell back into my hands. I've seen video footage of the astronauts playing with objects in that environment during the Apollo missions and thinking how unreal it appeared. It was incredible to be able to experience something even close to that during my lifetime. I cannot thank NASA and the Reduced Gravity office enough for the opportunity."

Beyond the flight-week experience, Schlueter said the program provided him and his team members with the opportunity to move an experiment from design to completion to testing. "It was a great chance to apply the engineering education we had accumulated to this point on a real project outside of the classroom," Schlueter said. "It forced us to work as a team to complete the project under time and financial restrictions. It certainly was an experience which will help all of us as we pursue engineering in our future careers."

Also featured in the video is Jack Mondry, team leader for PoweRED Up. Team PoweRED Up experimented with the most efficient way to move an incapacitated astronaut in a lunar environment. The team concluded that the most efficient way is by means of cables attached to the top-rear of the spacesuit and using a winch and pulley system. "Because our specific research has not been performed before, there is room for many follow-up projects to expand on our results," Mondry said. "Although we would never wish for an astronaut to become incapacitated during an EVA (extravehicular activity), it is nice to know something that we helped develop could save their life." 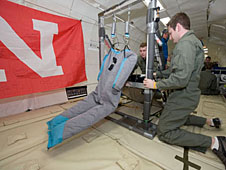 Team PoweRED Up experimented with the most efficient way to move an incapacitated astronaut in a lunar environment. Image Credit: NASA

Mondry described the flight as the most incredible experience of his life and remembered distinctly the experience of his first parabola in simulated lunar gravity. "I was on the floor with the engines roaring, and all of a sudden I heard the engines throttle back and felt the weightless feeling in my stomach. ... As I attempted to stand for the first time, I pushed off of the floor and went straight into the ceiling of the aircraft. It was amazing how little force it took to move in (simulated) lunar gravity."

FAST team member Nick Kleinschmit says in the video that participating in the NASA project was an experience of a lifetime. "If I were to put together a list of my greatest experiences ever, this flight would be at the top of the list. I put a countless number of hours and days into this project, for less than 10 minutes of reduced gravity, but given the chance I would do it again in an instant. Every time I look back, I wish that I could do it again, and I start reminiscing to myself, remembering the best thrill ride of my life. What a great program."

George Gogos, Nebraska engineering professor and advisor to Team FAST, spoke highly of the NASA project and the university's engineering students who participated. The NASA program is very competitive, Gogos said, and being the only state with two teams in the program that year says a lot about the strength of Nebraska's engineering program and students. Carl Nelson, associate professor in the department of mechanical engineering, was the advisor of Team PoweRED Up.