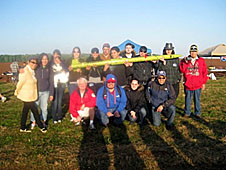 Teacher Gary Brandt from Lummi Nation's Northwest Indian College, in Washington State, would tell you one thing if he could: Don't let your inexperience keep you from trying something new, no matter how intimidating it may look.

He knows this from his school's experience. Brandt, an educator since 1974, has spent much of his career teaching about computers and robotics. He's taught students everything from building, programming, maintenance and repair, to networking -- and suddenly found himself wondering what else he could do to ignite his students' interest in science, technology, engineering and mathematics, or STEM.

One afternoon in November 2009, he was in his classroom with two students when all three began talking about what might be worthwhile and fun to try next. One of the students mentioned rocketry, and just like that, they began their quest. Only there was a hitch -- Brandt had never worked with rockets, and neither had the students. They were not at an engineering college, which meant that there were no experts at the school to talk to about rockets and propulsion. But the group didn't let these things stop them and ended up recruiting two more students.

The students conducted some research and opted to go with water rockets. It turned out to be a great idea: The students not only learned about rocketry, but launching them on the small campus drew the attention and notice of other students. Before long, the small team grew to include 12 students between the ages of 17 and 77. The Northwest Indian College Space Center Team, REZRiders, was born. They signed up for their first rocketry contest: the First Nation's Launch Competition. Held in May 2010, the REZRiders placed an impressive 2nd place. Feeling better about their capabilities, in August 2010 the team attended NASA's Advanced Rocketry Workshop. With encouragement from the NASA staff and additional support from NASA's Tribal Colleges & Universities Project, the REZRiders set their sights on another competition, NASA's University Student Launch Initiative, or USLI.

Rockets have to go through a rigorous safety inspection before being allowed to fly. Image Credit: Northwest Indian College

Were they intimidated? Yes. Were they nervous? Yes. Did that make them quit? No.

Their facilities weren't what some people would consider ideal: All they had for their workspace was a six-foot table in Brandt's classroom, plus some space in his basement workshop at home. Still, the students were not deterred. They did their research and built their rocket, and finally were off to Huntsville, Ala., where the USLI competition is held annually.

Before being allowed to launch their rocket, the students met with a panel of NASA rocket scientists to go through readiness reviews. The students were tense about this portion, since it was a question and answer session with some very knowledgeable people from NASA. Said Brandt of the process, "The reviews were probably the more nervous thing the students had to go through, especially that first one. They knew what they were talking about but had to learn to talk about it versus just reading from their notes. It was a great process for them to go through."

Besides the NASA panel, the students participated in a poster session where their rocket and design process was on display for visitors to review. Teams got to walk around and see what other schools had done. Students talked to and learned from other teams about their process and what they went through. A student wrote, "My most favorite part was talking to the other schools about their rockets at the rocket fair. It was great because unlike other fairs (where) you ask generalized questions and/or just go to the booths that interest you the most. I was able to go to them in a row and have an enthusiastic conversation with each individual. I had a lot of questions to ask and was able to relate and know what they were talking about. It was cool to hear that each group went through similar, all, or some of the problems our team went through. So by the end, we were sincerely meaning 'good luck' because by the end we all wanted the same thing: for the rocket to be successful and we all had just (gone) through the same problems to get there." 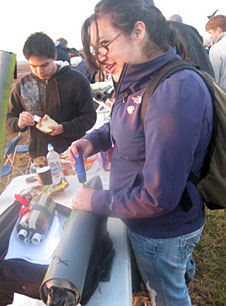 Once the reviews were completed, the students' rocket was given the go-ahead for launch. It didn’t go as perfectly as they'd like, but the students themselves gained a lot from the experience. One wrote, "Indeed, the whole process was empowering because it's made me realize that we're capable of anything we set our minds to and can aspire to our true passions and interests in life."

The team ended up placing 17th in NASA's USLI competition. While they didn't win, the fire was ignited and the team went on later that school year to compete in the 2011 First Nations Launch competition. For the First Nations competition, the students had to do much of the same work but also had to give a live presentation. Brandt wasn't concerned though; he knew that the students were prepared for it by their USLI experience. The students ended up placing first in the First Nations Launch competition within the Tribal College ranking. Brandt attributes that win in part to the rigorous preparation for the USLI competition. He said, "The USLI experience was instrumental in preparing us for this competition. The reports, presentation and everything else that the USLI project made us do really prepared our team to not only compete from a confident position, but also taught us what it takes to be a team and to truly believe in ourselves."

The REZRiders from Northwest Indian College are continuing to move onward. They have gained some new members to replace those that graduated and are hoping to compete in the 2012 USLI competition, along with other rocketry competitions. The team that just a while ago didn’t know a thing about rocketry is now ready for launch.