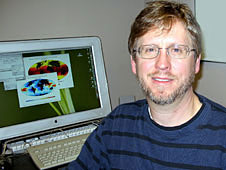 Like many children, Mark Chandler was fascinated with fossils when he was young. He made frequent trips as a child to an old limestone quarry close to his house searching for the remains of ancient creatures in the rocks.

Chandler did not consider a career in science until college. He took several engineering courses, but not until he found himself in his second geology course was he sure of his future.

That summer, he signed up for a paleontological dig in South Dakota. For him, unearthing dinosaur bones was like a "real life Indiana Jones" movie.

As much as Chandler loved science's tactile side, he didn't always enjoy some of the necessities of geoscience in his earliest engineering courses. "Personally, getting through the math as a university freshman was difficult. I just didn't appreciate its value. It seems silly in retrospect, since I now realize that math is just another tool, and complex tools can take time to master. But at the time I was intimidated." His mathematical training now has proven critical for his work.

While academic studies are important, Chandler says getting involved in research and spending time in the field are also essential because they connect the textbook science to real-world events. Those field experiences helped Chandler realize how complex and dynamic our Earth is.

One such research project on the Colorado Plateau made Chandler curious about climate change. The rocks of the Colorado Plateau are the remains of a 150-250-million-year-old desert -- a desert larger than the Sahara -- with sand dunes the size of skyscrapers. Chandler found himself wondering how such a vastly different climate could have existed in the region.

Working at NASA's Goddard Institute for Space Studies in New York City, Chandler had the chance to "use a computer climate model as a time machine" to explore that ancient climate. "The results gave me a way to understand so much better what the Earth of the past was like." Studying how Earth's climate has changed in the past allows scientists to make predictions about future changes. "We now realize that the Earth of the future -- the not-so-distant future -- may have a very different climate too and the ramifications for humans are great."

Luckily, Chandler says, "we have tools that can be used to explore Earth's future climate and that can help us make wise decisions about how to adapt to climate change where possible" -- as well as when to take action to avoid climate change if it turns out to be too extreme.

Chandler's computer modeling and fieldwork keep him busy. "I never get bored," he says. These days, more than just the science drives him: "The societal urgency makes the job very interesting in a way that goes well beyond scientific curiosity." Chandler sees the impact his research has, helping policy makers to understand how the world is changing and the impacts those changes will have on society.

Chandler reminds students, "Be interested in the world around you -- be observant and appreciate how complex it is, but also be confident that the tools of science and the scientific process can teach us much that is useful." Underlying science is a primal fascination with the world as a whole. Einstein and Shakespeare, Chandler say, should both be read and understood, "for Albert Einstein may have said, 'The most incomprehensible thing about the world is that it is comprehensible,' but Shakespeare wrote, 'There are more things in heaven and earth ... than are dreamt of in your philosophy.'" Science expands the scope of our questions as much as it helps to answer them.