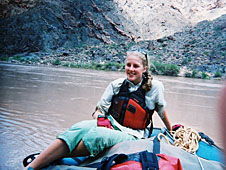 
View Larger Image
Tanya Petach's passion for science began with questions -- such as "Why do the trees lose their leaves?" and "Why does that rock have holes in it?" -- that she could easily find answers for, even as a young child. Whether it was a parent, teacher (or both -- her mom is a physics teacher), sibling or friend, someone usually could satisfy her curiosity.

As she grew older, Petach asked harder and more specific questions: "Why is this leaf green and that one purple? How does the pressure of magma underneath tectonic plates change as they crash together? But, to my dismay, there were [still] always answers," Petach said. "Somebody had inevitably been curious before me and developed a perfectly sound response.

"It wasn't until I stumbled onto newer topics with fewer answers that my passion for science was truly ignited."

One of the first such topics was a pine bark beetle infestation in Colorado. Petach and her sister, Anika, used satellite imagery to identify geographic features susceptible to pine beetle attack and measure the response of two forest regions to pine beetle repellent. The project was a Grand Award Winner in the 2008 Colorado State Science Fair.

"For once in my life, there were no answers. I was not theorizing and checking my ideas against a template -- I was creating a template," Petach said. "The passion that drives me into science ... is a passion for the unknown."

More recently, the Boulder, Colo., high school student used images from NASA's Landsat satellite, direct water measurements and geographic information systems to study the high salinity of the Colorado River, which causes more than $300 million in damage per year according to the U.S. Department of Agriculture. Her study earned first place in the 2010 Thacher Environmental Research Contest, which is held by the Institute for Global Environmental Strategies and recognizes students in grades 9-12 who demonstrate the best use of satellites and other geospatial technologies or data to study Earth.

Just as too much salt in the bloodstream can raise one's blood pressure and strain vital organs, too much salt in waters used for irrigation can damage soil and destroy plants. Petach's project identified the most important sources of salt into the river and explored methods for reducing river salt concentrations.

"The rivers of the West support unique ecosystems, agricultural development and urban needs. I became fascinated with these rivers while hiking on the Colorado Plateau as a young child," said Petach, who won an award at the 2010 Intel International Science & Engineering Fair with a related project. "The interaction between field studies, geospatial analysis and laboratory investigations is crucial in solving today's environmental issues. Multidisciplinary approaches allow us to tackle environmental issues from multiple points of view."

Petach's fascination with science is not limited to this planet. She is also part of a NASA program -- the NASA/IPAC Teacher Archive Research Program, or NITARP -- that partners scientists with primarily high school teachers to conduct research projects using data from NASA's Spitzer Space Telescope. Together, NITARP scientists, teachers and their students search for "active galaxies." These galaxies are believed to contain black holes at their core that are billions of times more massive than the sun.

As she enters her senior year in high school this fall, Petach hopes to continue her search for answers to unanswered questions about Earth and space.

"In ancient Chinese map making, cartographers drew dragons where their knowledge of the land ended," Petach said. "My passion lies in the dragons of science, and, luckily, there is an infinite supply."