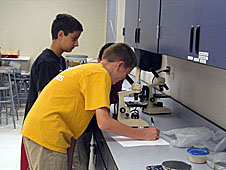 For Parkridge Elementary in Peoria, Ariz., the Student Spaceflight Experiments Program has been an extraordinary opportunity for students to make a real-life application of what they have learned in the field of science. Students in grades 5-8 had the chance to design an experiment to be flown on Atlantis during the final space shuttle mission. "It has been such a privilege to be a part of this experiment," said Devin, a member of the winning team. "And to have ours chosen to go up into space is a once-in-a-lifetime opportunity that I'll never forget."

When students found out about this opportunity, they were excited and eager to start. Not only did students have fun while designing and conducting their experiments, but they were able to gain real-world experience regarding what scientists do. While participating in this amazing opportunity, students came up with experiments ranging from testing the influence of microgravity on radish seeds, to the effects of genetic engineering of E. coli, to how microgravity would affect yeast. 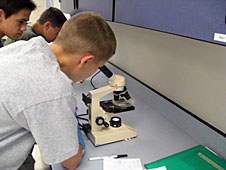 The winning experiment flown on Atlantis tests to see if microgravity has any effects on the behavior of yeast. The three boys who designed the experiment have worked so hard since the moment they knew about this life-changing opportunity. The boys were very excited that their experiment would be on the last space shuttle. "I wanted to be a part of it because it is very important," says Alex. Jason stated, "I am excited because our experiment is going on the final space shuttle flight ever. It's an amazing experience that I will be able to share with my children someday."