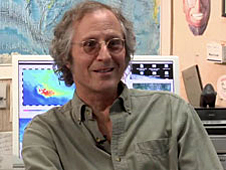 Gene Feldman has been studying the ocean for more than 25 years, primarily by analyzing satellite measurements of ocean color, which is a proxy for ocean plant growth. Feldman admits that scientists still know "very little about the vast majority of the ocean."

You might think this NASA oceanographer would be discouraged about the apparent lack of progress. Quite the opposite, Feldman speaks with enthusiasm about how far scientists have come in understanding the ocean and how the next generation of scientists can help learn more.

Earth Explorers recently spoke with Feldman, just back from a trip to the Galapagos, a group of volcanic islands in the Pacific Ocean along the equator. For more than two decades, Feldman has used satellites to explore the Galapagos -- known for their unique and diverse mix of wildlife -- but had never before seen the islands in person. So when Feldman was invited there to participate in a conference and research cruise, he couldn't refuse.

We asked Feldman about his trip to the Galapagos, how he first became interested in the oceans, his advice to young scientists, and more.

What makes the Galapagos so special?

Of all the places in the world, there's probably no place like the Galapagos. Because of its unique and very isolated location and the influence of the ocean currents that bathe the islands in both cold and warm waters, the Galapagos have allowed species to evolve in ways that can be found nowhere else. Where else can you find penguins and coral reefs in the same location?

What was one of the more memorable moments of the trip?

While anchored for the night under the sheltered arms of the steep volcanic cliffs, the only sounds that I heard as I fell asleep were the crash of the waves on the shore, perhaps 50 feet away, and the bark of the sea lions. A splash of wave against rock, the creak of the ship's wooden deck, a bird's call from overhead, a sea turtle surfacing alongside the boat are just some of the sounds that fill the night. These were the same sounds that I imagined Charles Darwin heard when he visited the islands back in 1835 and that had such a profound effect on his thinking.

When did you first become interested in the oceans?

I've always been attracted to the ocean. I really think it all started when I would spend summers with my grandparents out on Rockaway Beach, a place just outside of New York City. My grandfather loved fishing, and, whenever possible, he would take me with him. Sitting on the beach with him hearing the gulls and watching the waves come ashore, I remember wondering what was out beyond the breakers, what was down there below the surface. That fascination of sailing out beyond the horizon always struck me as something just really, really appealing. 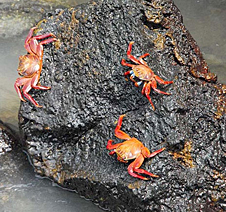 When did you begin to see yourself pursuing a career in oceanography?

In high school, I started realizing that I actually could do something with this interest that I had in the ocean. While my school didn't offer any oceanography classes, I did somehow manage to find ways to get out to sea. One of the things I did while in high school was to volunteer to go out on commercial fishing boats, just to see what it was like. Then, when I got into college and my interest became more serious, I volunteered to go out on as many research cruises as I could. I jumped at every opportunity to get out on a boat or get involved in some kind of oceanographic research project.

Earth is really an ocean planet. On land, life exists in this relatively thin layer that begins a few feet below the surface of the soil and extends up into the tops of the trees. But in the ocean, life flourishes all the way from the surface to the very bottom of the deepest part, nearly seven-and-a-half miles down. Because of this, the oceans contain 99 percent of the living space on the planet.

Our knowledge about the oceans and technology that we have to study the oceans these days is so much more comprehensive and improved than it was when I was in school, 30 to 40 years ago. Back then, the most common way to sample the ocean was to drag a net through the water and see what you caught, or lower some bottles over the side and pull the water up to see what it contained. There were no satellites studying the oceans.

However, even with all the technology that we have today -- the fleet of satellites that observe the ocean every day, the drifting buoys and the autonomous underwater vehicles, and the thousands and thousands of ship tracks that have been done -- we have better maps of the surface of Mars and the moon than we do the bottom of the ocean. We know very, very little about most of the ocean, especially the middle and deeper parts far away from the coasts. 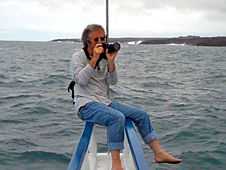 It's a really hard place to work. In many ways, it's easier to put a person into space than it is to send a person down to the bottom of the ocean. For one thing, the pressure exerted by the water above is enormous. At the deepest point in the ocean, the pressure is more than 8 tons per square inch, or the equivalent of one person trying to support 50 jumbo jets. It's also dark and it's cold. Unlike space where you can see forever, once you're down in the ocean you can't see anything, because your light can't penetrate very far. It's a technologically challenging place to study.

Satellites are great for giving us a broad picture of the surface of the ocean over a very short period of time, which we call a synoptic view. We can measure temperature. We can measure ocean color, an indicator of the abundance of plant life in the sea. We can measure the winds, the waves and sea level. But what we can't do from space at this moment is make some of the key three-dimensional observations we need, down into the depths of the ocean.

How can the next generation of young scientists contribute to our understanding of the ocean?

Never stop asking questions or challenging the things that we think we understand. Our curiosity about the way things work will drive the technologies of the future. While scientists will always need to go out to sea, or to go under the sea, we also need people to help evolve the technology that will allow us to study the places people can't easily go to in person, either because of the danger or expense.

What advice would you give to students considering careers in oceanography and other Earth sciences?

Science is sometimes presented as how much we know. It often can give kids in school the misconception that we have all the answers, that we know everything there is to know about Earth, that there's nothing more to learn. I disagree vehemently with that. There are things about this wonderful planet that are still a mystery. There are challenges and new things yet to discover that can keep scientists busy for as long as there are people on this planet. And we'll still not have all the answers, because the world keeps changing -- sometimes on its own and sometimes because of the things that we do.

There's so much more yet to be learned about this amazing planet called Earth. Every time we turn over a rock, there's something new. Every time we explore some place new, there's something we've never seen before. Every time we think we understand the way things work or fit together, more things pop up that we don't understand. Science is puzzle solving, and it's really fun trying to figure out how things work and how everything fits together. More importantly, it's the only way we are going to make sure that we can take care of this amazing place we call home.