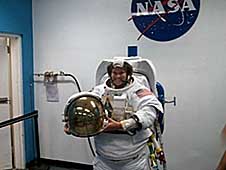 Lots of students love NASA -- what people might not realize is that NASA loves students right back. NASA has many education projects and programs available to students who are interested in pursuing a science, technology, engineering or mathematics career. While hundreds of students are accepted into the various internships and opportunities in any given year, NASA has developed a community of the highest-performing interns, known as NASA Student Ambassadors. They are selected in groups, called "cohorts," annually.

NASA Student Ambassadors are exactly what their name implies: They act as ambassadors of NASA who engage with the public in many different events and forums. As interns and/or fellows, the students can interact with NASA personnel and make important connections and collaborate with peers; in return, the Ambassadors represent NASA in a variety of venues to help inspire and engage future interns and/or fellows. In the spring of 2012, two students from Illinois worked at the Illinois Space Day event that was held for junior high and high school students. Roughly 220 students were guests at the day-long event, and NASA Student Ambassadors Samantha McCue and Dan Miladinovich hosted booths and spoke to students about their internships and fields of study. Samantha and Dan are two examples of how students can take advantage of NASA's offerings and give back to the agency.

Samantha McCue’s journey with NASA began with the Undergraduate Student Research Project at NASA’s Johnson Space Center in Houston, Texas. Samantha learned about USRP by searching NASA’s education offerings posted online at the NASA Education website. In the spring of 2011, NASA offered her an internship with its Extravehicular Activity Office. While with the EVA Office, Samantha worked on improving a pre-existing database that listed over 2,000 known failures of the Extravehicular Mobility Unit. The database had little to no uniformity and was virtually unusable by members of the NASA community. Samantha’s work on the database included adding structure and search functionality, plus more in-depth detail to enhance its usability for engineers within NASA. The database is an important tool for the engineers working with the EMU, and her work made the database much more usable. Samantha plans to graduate in 2013 and enter the workforce, hopefully with NASA as either a civil servant or contractor. She intends to work toward her master’s degree in either aerospace or systems engineering, with an ultimate goal of gaining enough experience to apply to the astronaut corps. 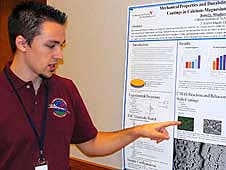 Dan Miladinovich's initial journey with NASA was not that different from Samantha’s; he too looked online and found out about NASA's Undergraduate Student Research Project. Dan was able to participate in two separate projects with USRP during two semesters. On his first project, he researched corrosion resistance of materials used in gas turbine engines to learn how newly developed coating materials reacted to typical airborne particulates. For his second-semester project, he worked on an optimization software program to design possible trajectories for a potential future Mars sample return mission. The data gathered from the software could assist engineers in formulating performance requirements needed for a launch vehicle to carry a large amount of mass off the surface of Mars and return it to Earth. He also will continue his education by working on his master’s degree and doing more research.

Both Samantha and Dan had a desire to work for or be involved with NASA, and both found information on NASA's Education website about available opportunities. Being selected to participate in a project like USRP isn’t always easy and doesn’t always happen on the first application. Some students apply numerous times before being accepted. From his experience, Dan tells students, “Never stop trying. Don’t ever consider any task too daunting for you or anyone. With enough dedication and persistence, you can do anything. Some things take time, and everyone interested in studying science and engineering has to realize that.” Samantha also suggests, “Students who are interested in working with/for NASA need to set themselves apart from their peers through extracurricular activities, technical projects and internships. Not only will you gain great experience in the field, but you will also learn how to communicate effectively with others. My communication skills were one of the main reasons I was so successful during my time at JSC.”

Once accepted into the project and working in their respective internships, both Samantha and Dan made sure to stand out from the crowd. Because of their hard work and dedication to NASA, both were invited to be a part of NASA Student Ambassadors Program. They have served as NASA student representatives at different outreach events where they talked to young students and parents about their experience with NASA. Being able to reach out to younger students and get them excited about a possible career in STEM has given both Samantha and Dan a greater appreciation for the importance of reaching out to a younger audience. They’ve also enjoyed the opportunity to reach out to other college students like themselves and share their experiences with students who are still applying for a position in one of NASA’s education initiatives.

Dan sums up his experience as a NASA Student Ambassador this way: “The kind of experience I had as an intern at NASA was amazing, and I love to help other students learn how they can have the same kind of experience.” As for Samantha, she writes, “It was very exciting to talk with little kids about the things they could someday achieve. I find that being a NASA Student Ambassador is ... as motivating for me as it is for the children I interact with. Most importantly, I enjoy educating others about the many benefits of NASA, especially in such tough economic times.”