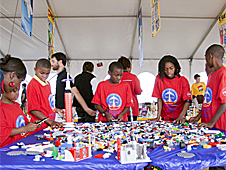 To commemorate the beginning of this partnership, the crew of space shuttle Discovery's STS-133 mission will carry a small LEGO® shuttle when it launches Wednesday, Nov. 3, from NASA's Kennedy Space Center in Florida.

The partnership marks the beginning of a three-year agreement that will use the inspiration of NASA's space exploration missions and the appeal of the popular LEGO bricks to spur children's interest in STEM. The theme of the partnership is "Building and Exploring Our Future."

The LEGO Group will release four NASA inspired products in their LEGO CITY line next year. The space-themed products will vary in terms of complexity, engaging audiences from young children to adult LEGO fans. Each product release will contain NASA-inspired education materials. 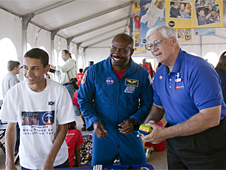 
View Larger Image
"Partnering with The LEGO Group is a perfect fit. We have taken the excitement of NASA's missions and coupled that with kids' love of creating things with the iconic LEGO bricks, "said Leland Melvin, NASA's associate administrator for Education. "These projects not only foster creativity but also instill in the young builders a real sense of the engineering and design principles that NASA uses every day. Fun learning activities like these can help inspire kids to become the next generation of explorers."

As part of the Space Act Agreement, NASA will send special LEGO sets to the International Space Station aboard shuttle Endeavour's STS-134 mission in February 2011. The sets will be assembled by astronauts on-orbit and by children and student groups across the country. The building process and set activities will demonstrate the challenges faced when building things in the microgravity environment of space.

"The LEGO Group's purpose is to inspire children to think creatively, reason systematically and release their potential to shape their own future," said Stephan Turnipseed, president of LEGO Education North America. "The partnership with NASA provides us a unique opportunity to fulfill our purpose while expanding the imaginations of children around the world. A child who plays with LEGO bricks today can become the NASA astronaut or engineer of tomorrow. " 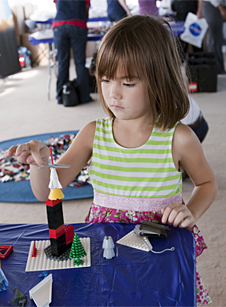 In an activity tent chock full of LEGO bricks at NASA Kennedy Space Center, children are building their vision of the future. Image Credit: LEGO


View Larger Image
As part of the NASA-The LEGO Group partnership kick-off, a 40-feet by 70-feet activity tent will be set up Wednesday at the shuttle launch viewing site on the NASA Causeway. Children of all ages will be invited to get creative and build their vision of the future with LEGO bricks as they await Discovery's launch.

To see images from the LEGO Build the Future event on the NASA Causeway, visit: http://www.LEGOspace.com.

NASA's Office of Education in Washington seeks partnerships that help the agency promote student interest in STEM studies and careers. For more information about NASA's partnership with LEGO and other education programs, visit:
http://www.nasa.gov/education.