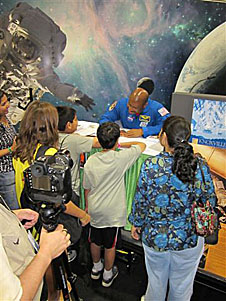 From May 25-28, 2011, Tennessee played host to some of the most imaginative students in the world today. Destination ImagiNation is a nonprofit organization that provides educational programs for students to learn and experience creativity, teamwork and problem solving.

As its core program, Destination ImagiNation provides the backdrop for schools to host an after-school activity where students work in teams to meet challenges and present their solutions at tournaments. Over 100,000 students from across the U.S. and 30 countries take part in the after-school challenges within their local areas. Of those students, roughly 8,000 of them took honors in regional and statewide competitions. Those students earned their way to the finals in Knoxville, Tenn. At the 2011 finals, there were over 1,100 teams representing 43 states and 15 countries.

NASA was on hand at the Global Finals 2011 with a number of exhibits and NASA representatives. One such exhibit was a large inflatable dome, NASA's Driven to Explore exhibit. The exhibit is a mobile, multimedia dome that immerses visitors in the history of NASA. Visitors learn why we explore, discover the challenges of human space exploration and experience firsthand how NASA provides critical technological advances to improve life on Earth.

In addition to the Driven to Explore exhibit, NASA had two education booths hosted by the Johnson Space Center in Houston, Texas, and the Marshall Space Flight Center in Huntsville, Ala. At the exhibits, students 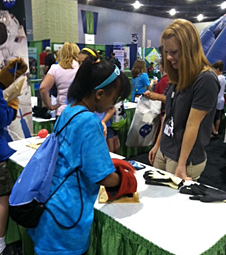 could touch an actual moon rock or take part in hands-on educational activities. Kelle Pido of NASA's Johnson Space Center was excited to meet the students and hoped they would get a chance to touch the moon rock. That way, she knew that "every time you look up and see the moon, you can tell your friends, 'I touched that!'" The students also engaged in hands-on activities from NASA's Suited for Spacewalking educator guide. Donning gloves, students had to work on seemingly simple tasks such as buttoning and tying items, or zipping up a zipper. Wearing thick gloves makes these tasks much more difficult to complete and gives the visitor a sense of what an astronaut experiences when working in a spacesuit and having to manipulate small objects.

The Destination ImagiNation organizers were especially proud to have as a very special guest: NASA's Associate Administrator for Education and former astronaut, Leland Melvin. A veteran of two spaceflights, STS-122 in 2008 and STS-129 in 2009, Melvin has logged more than 565 hours in space and traveled 97 million miles. He became the associate administrator for education in October 2010.

Students were able to meet Melvin and ask him questions about becoming an astronaut and what it was like to live and work in space. An important message he shared with students was to be diversified and have back-up plans while following their dreams. As a National Football League, or NFL, player, Melvin was injured and could no longer play professional football. But his lifelong commitment to both academics and athletics gave him a valuable safety net. He went back to school to pursue his master's degree, went to work for NASA and then went on to become an astronaut -- proving that a good education is an important foundation no matter what your dream is. 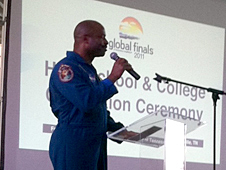 Leland Melvin shares his personal and professional ups and down with the graduating class and encourages them to work hard to fulfill their goals. Image Credit: NASA

At the end of the finals competition, Melvin was the keynote speaker for the graduation ceremony. He applauded the students for their efforts and encouraged them to continue their own pursuit of excellence in fields including science, technology, engineering and mathematics, or STEM. He spoke about the Columbia tragedy. He stressed how important it is to continue the crew's legacy and honor their memories through exploration, education and inspiring the next generation of explorers. Melvin, whose parents are both educators, is a passionate advocate for education and knows the important role that a program like Destination ImagiNation can play in students' academic careers. He reiterated NASA's commitment to building the technical workforce of tomorrow and challenged them to reach higher and be a part of that exciting future.