Most people will never have the chance to lay eyes on the longest mountain range in the world, the vast majority of which lies beneath the surface of the Atlantic Ocean. So when Amanda Hintz found herself standing at the Mid-Atlantic Ridge during a trip to Iceland in 2000, one of the few places where the nearly 10,000-mile mountain range rises above sea level, she made sure to take it all in. 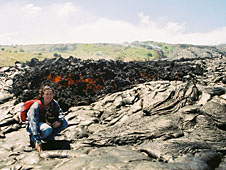 
View Larger Image
And that's when it hit her: Although she was a fine arts major at the time, geology was her true calling.

Ten years later, as she pursues a doctorate in geology as part of the NASA-sponsored MSPHD's program (Minorities Striving and Pursuing Higher Degrees of Success in Earth System Science), Hintz still looks back at her trip to Iceland as a life-changing experience. She vividly remembers the view from the Eurasian side of the Mid-Atlantic Ridge, which spans the north-south length of the Atlantic. The ridge separates the Eurasian Plate from the North American Plate in the North Atlantic, and the African Plate from the South American Plate in the South Atlantic.

"Iceland changed my life forever," Hintz said. "I remember standing on the Eurasian plate that was, in that area, significantly higher in elevation than the North American plate. There was this giant chasm between the two plates, and I was so struck by what I was seeing. This was what I had been reading about in books and seeing simplifications of in diagrams -- this was real geology."

That up-close and in-person encounter with "real geology" might never have happened if it were not for Hintz' grandparents. They gave her money for the trip, which was led by a group of science professors at her community college.

"They said they would pay for it because they could see what an important opportunity this was," Hintz said. "I was completely shocked, but looking back now, I can see that they really knew how this was going to open doors for me."

What ultimately drove Hintz to shift gears from art to geology, she says, was a desire to understand the world around her more deeply.

"I wanted to possess the powers of observation that would allow me to decipher my surroundings and be a part of the science community, finding problems and figuring out solutions," Hintz said.

To earn bachelor's and master's degrees in geology, Hintz had to conquer a subject she had managed to largely avoid through high school and her early college years: math. It's a subject that strikes fear into many would-be scientists.

"I can definitely identify with math phobia," Hintz said. "But everything changed once I decided I was going to be a geologist. I knew that if I wanted a degree in geology, I was going to have to ... deal with a lot of math. Once we started learning about ... how some of these concepts could literally be used in my line of work, things just started to click.

"I think it's important to find a field to work in that you love. Your motivation to work in that field will become your primary focus and all of a sudden something like a math phobia will just be another obstacle to overcome." 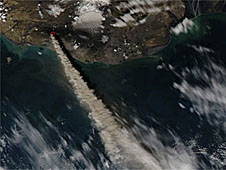 
View Larger Image
Now about halfway through her doctoral work at the University at Buffalo, Hintz has focused her studies on volcanoes and volcanic fields -- land areas that are prone to volcanic activity and contain tens to hundreds of volcanoes. She says volcanoes are an important area of research as urban sprawl places more and more people in the path of volcanoes that could become active, even if they have been dormant for centuries.

Hintz watched with close interest the April eruption of Iceland's Eyjafjallajokull volcano and its aftermath, as clouds of volcanic ash grounded air traffic across Europe. The ash inconvenienced travelers for days and cost airlines more than a billion dollars.

When would the volcano stop erupting or become less explosive? It was a difficult question to answer, and one that relates to the deposits she's been studying from a volcanic field in Nevada. Volcanic deposits can offer clues to when and for how long a volcano erupted thousands or millions of years ago. The deposits also have the potential to provide insights into modern-day volcanic eruptions exhibiting characteristics similar to a past eruption.

"There is a demand for the type of work I'm doing on what is essentially the frozen record of the end of an eruption and being able to relate it to a current eruption," Hintz said. "Hypothetically, we might find that there is some geochemical change in the eruptive products that could be sampled from an erupting volcano like Eyjafjallajokull ... that would give scientists a clue that signals the end of the eruption is near."