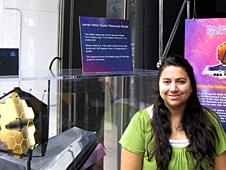 Pictures speak a thousand words. When trying to explain difficult concepts in Earth and space science, pictures can make all the difference between confusing and tedious or understandable and fun.

Maggie Masetti has kept this in mind while designing games and Web sites intended to educate students, teachers and the public. Currently, she is part of the education and public outreach team in the Astrophysics Science Division at NASA's Goddard Space Flight Center in Greenbelt, Md. Her goal is to help make teaching and learning science more fun, and she's created ways to do just that for more than a decade.

Masetti created the new "Scope It Out!" game on NASA's James Webb Space Telescope, or JWST, Web site. The telescope will help astronomers study the universe; it is planned to launch in 2014. Masetti says the word "telescope" makes people think of a long tube that they peer through to look into space. While the James Webb Space Telescope doesn't look much like a typical telescope, it still has similar parts that do similar things. That's precisely what "Scope It Out!" is meant to teach students. 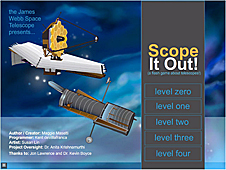 The interactive game, which uses pictures and animations, shows how light travels through the two main types of traditional telescopes; compares the parts of a traditional telescope with those of the James Webb Space Telescope; and compares it with the Hubble Space Telescope. Another game that Masetti is working on will let players create their own space satellite. The game will teach them about the science behind satellites and will help them understand the cost and technical challenges involved in building one.

Masetti is no newcomer to astronomy and space science. Her father, who served in the U.S. Air Force, was always passionate about airplanes and cultivated that interest in his daughter. She remembers going to air shows and making model rockets with her dad when she was a child. She went to Space Camp in 10th-grade and dreamed of being an astronaut.

But Masetti found her true calling as an outreach intern at Goddard while getting her bachelor's degree in physics and astronomy. The internship combined her love and interest in science with her skill in explaining it to people. "I really enjoy this niche," she said. "I think science is very important. It's very important to have a curiosity about the world around us."

So when she was offered a permanent position working at NASA, Masetti took it. After working on astrophysics educational Web sites for a few years, she decided to foray into Earth science.

She worked on the interactive Amelia the Pigeon Web site, which teaches students in grades K-4 about remote sensing by following Amelia, a camera-carrying pigeon. Remote sensing is a technique satellites use to take images of Earth by detecting the energy reflected from trees, soil, water and other objects.

The key to making science easier to grasp is to relate it to something people know from everyday life, Masetti says. In an activity that she helped design, for instance, pieces of candy are used to teach about X-rays. Each piece of candy represents a particle of light, or a photon, with different colors representing different energies.

Masetti admits that science isn't always easy to understand. When she first started college, she realized astronomy was different than she thought it would be.

"I thought it was a lot of looking through telescopes and stargazing," she said. "It's kind of romantic." But she soon discovered a lot of "nitty gritty" -- math and physics -- behind it. Knowing the size and location of a star, for example, requires a lot of calculations.

As tough as the subjects may be, learning math and physics is important, Masetti points out. They teach the basic principles needed to explore Earth and space. "It's like learning an instrument," she said. "You have to practice scales and get sounds out of it before you can play anything beautiful."

Are you an educator who uses Hubble Space Telescope to teach STEM? Find out how you can be a NASA Top Star: topstars.strategies.org   → .