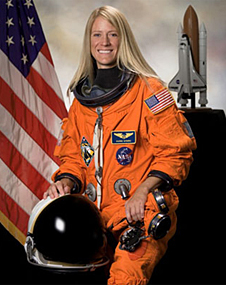 Astronaut Karen Nyberg will soon experience her first spaceflight, but the Minnesota native's history with NASA dates back to her college years.

Nyberg was a college sophomore when she first worked as a co-op student at NASA's Johnson Space Center in Houston, Texas. She worked at the center while earning her bachelor's and master's degrees in mechanical engineering. NASA's cooperative education projects give students real-world working experience and support the agency's goal of strengthening NASA's and the nation's future workforce.

Nyberg helped the team at Johnson design a robotic mechanism to lock the portable foot restraint as astronauts move to different work sites during a spacewalk. She received a patent for her design of the robot-friendly probe and socket assembly.

Nyberg earned a doctorate in mechanical engineering in 1998 and went to work as an environmental control systems engineer with NASA's Crew and Thermal Systems Division. The division is responsible for designing, testing and developing technology for environmental control and life support systems for spacecraft, as well as crew equipment and spacesuits for spacewalks.

Nyberg supported improvements to the spacesuit thermal control system and the evaluation of firefighter suit cooling technologies; coordinated and monitored analyses for the environmental control and life support system for the proposed X-38 space station crew return vehicle; and provided conceptual designs of the thermal control system for studies into the Advanced Mars and Lunar Lander Mission.

In 2000, Nyberg applied and was selected as an astronaut. She said the path that led her to the astronaut corps was not necessarily intentional. 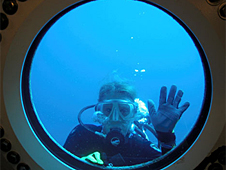 Astronaut Karen Nyberg waves as she looks through a habitat portal while on an extravehicular activity during the NEEMO 10 mission. Image Credit: NASA

The upcoming STS-124 mission may be Nyberg's first spaceflight, but it will not be her first NASA mission. Two years ago, she participated in the NASA Extreme Environment Mission Operations, or NEEMO, project. The project sends crews of NASA astronauts, employees and contractors to live aboard the National Oceanic and Atmospheric Administration's underwater laboratory "Aquarius" for weeks at a time. Located off the coast of Florida, Aquarius is an analog for space exploration as NEEMO crew members experience some of the same tasks and challenges underwater as they would in space.

Nyberg was a member of the NEEMO 10 crew, who lived in the underwater habitat for 10 days in July 2006. The mission included undersea extravehicular activities that imitated spacewalks and tested new concepts for mobility. Crew members used weighted backpacks to simulate lunar and Martian gravity. They also tested remote-controlled robots and new methods of communication and navigation as analogs for working on the moon.

Nyberg believes the underwater habitat experience helped her prepare for the upcoming spaceflight. "It's one of the best analogs for the mission itself as far as living and working together with a small crew where you can't leave," she said of the NEEMO mission. 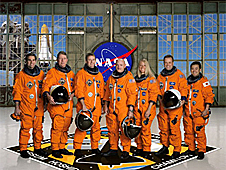 Nyberg is a mission specialist on the STS-124 mission, targeted for launch in May 2008. The mission's primary goal is the installation of the pressurized module and the robotic arm for the Japanese Experiment Module "Kibo." The new lab is being installed during three shuttle missions, with the final component to be installed in 2009.

Nyberg's primary task during the STS-124 mission is using the robotic arms on the space shuttle and the space station to install the new Japanese lab. She trained closely with astronaut Akihiko Hishode of the Japan Aerospace Exploration Agency to prepare for the installation and powering-up of the new lab. She will also be using Kibo's robotic arm once the arm is installed and working.

"This is a very important mission for Japan," Nyberg said. "It's just another step in the international partnership of the International Space Station.