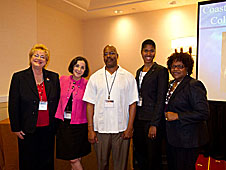 Without question, technology and education are both vital to the future of NASA.

New technology will open new doors for NASA missions of the future, and education will develop the workforce to carry out those missions.

So it only makes sense that NASA would award recognition for excellence in the overlap of those two areas -- technology use in education. NASA's Office of the Chief Information Officer recently honored recipients of its Excellence in Teaching Award, Faculty Research Award and Student Innovator Award.

The Excellence in Teaching Award went to a pair of teachers who created a partnership that spanned the country. Neme Alperstein teaches at Public School 56, The Harry Eichler School in Queens, N.Y., and Pam Leestma teaches at Valley Christian Elementary School in Bellflower, Calif.

The pair have implemented a variety of projects that use technology to allow Leestma's second-graders and their sixth-grade "buddies" from her school to collaborate "coast to coast" with Alperstein's fifth-graders. The teachers organized a coast-to-coast downlink with the International Space Station, where students at both schools were able to ask questions of astronauts aboard the orbiting lab. The downlink was held at the One Stop Richmond Hill Community Center in New York, which afforded participation to a number of schools in the area as part of their after-school program. In other activities, students in Alperstein's and Leestma's classes videoconference with scientists around the world and then compare notes. Their students have collaborated on websites, including one showcasing their visions of the future. Alperstein and Leestma both use NASA resources and opportunities to make the most of classroom technologies.

Alperstein said the human factors in technology use are the most important. "The landscape of learning has changed dramatically through technology, and the opportunities to spark imagination and creativity have expanded exponentially," she said. "We are surrounded by a digital world, and the students are already so familiar with the new forms of communication that I am convinced we need to take the lead and show them constructive possibilities of their use in learning. The interactive nature of the technology fosters student engagement with new choices for learning that address both differentiation and various learning styles. The excitement and enthusiasm I observe using technology and the resources online that NASA has provided have transformed the classroom and inquiry-based learning. If we want to broaden our students' horizons and prepare them for a successful academic and economic future, then education has the responsibility of providing 21st-century tools to enhance the learning environment."

Leestma stressed that it is vital that the education community stay current in a changing world. "We cannot get behind in education," she said. "Technology integrated with curriculum can grab the attention of children. It is our job as teachers to find those innovative ways to bring technology into the curriculum even with all the challenges we face. Teachers need to be inspired so they can inspire their students! We need 'user-friendly' tools to help prepare this next generation, which will be STEM (science, technology, engineering and mathematics) career-driven. NASA has the content and resources to give to teachers. Corporate companies need to get behind education and step up to the plate with funding. Technology can make a great impact on the children. I strongly feel that you must ‘ignite the spark when they are young'!"

The recipient of the OCIO Faculty Research Award was Carl White, the associate dean of research development and graduate studies for the School of Engineering at Morgan State University in Baltimore, Md. White explained that the award was "in recognition of the broad use of technology that I use in my teaching, communication and assessment of students. I am a firm believer of the use of all technologies in education."

"It is not only important to integrate current technologies in education, but it is also essential," said White, who first became involved with NASA when he received a minority fellowship from the agency while working on his master's degree at Howard University in 1980. "If we would like for our students to be equipped with the knowledge, as well as experience, required to compete in a rapidly advancing society, the incorporation of technology in education is imperative."

Danielle Wood received the OCIO Student Innovator Award. Wood is a doctoral student in the engineering systems division at MIT, where she studies aerospace engineering, international development and technology policy. She has been involved with NASA for more than a decade as an intern, research associate, operations manager, fellow, guest researcher and Student Ambassador. The award recognizes her doctoral research, which she explained "aims to understand and contribute to the efforts of several African countries to develop strong, indigenous space communities" and "is a mix of engineering, policy, and international development."

Wood agreed that technology can play a very important role in students' education. "Students can be inspired to pursue technical careers when they are exposed to current technologies in school," she said. "I had a great time in second-grade when a parent who worked for NASA volunteered to help us have a class rocket launch. Each student was able to practice doing a real job that is needed for launch. There are many affordable ways that technology, such as that used by NASA, can be introduced in the classroom. All of this makes careers that could otherwise be obscure seem interesting and attainable for students. Role models and examples are so important to shape students' dreams."