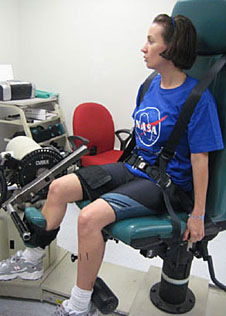 Earlier this year Heather Archuletta experienced what it's like to be in space -- well, sort of.

Archuletta lay in bed for nearly two months as part of NASA's bed rest study. The study simulates the effects of long-duration spaceflight by having test subjects lie in beds for 90 days. (Archuletta's study was cut short by Hurricane Ike.) The beds are tilted head-down at a six-degree angle. This tilt causes body fluids to shift to the upper part of the body much like they do in space.

"I don't think I could ever do what a real astronaut does, but I am happy to mimic their journey for the sake of keeping future ones more healthy," Archuletta said.

Through bed rest studies, NASA scientists develop new ways to keep astronauts healthier when they spend a long time in the microgravity of space. NASA calls these methods countermeasures. NASA uses countermeasures to minimize the changes that occur to the body during spaceflight and to enable the return of normal body functions once back on Earth.

The studies are conducted at the University of Texas Medical Branch in Galveston, Texas, as part of the Flight Analog Project at NASA's Johnson Space Center in Houston. The facility opened in 2005, but project manager Joe Neigut said the concept of bed rest studies has been around for a long time.

"What we're trying to do with bed rest is enable researchers to be able to perform science and different areas of research on these subjects," Neigut said. "We're really about countermeasures and trying to use our facility to test countermeasures that may end up in flight."

While in space, astronauts are limited in the amount of time they spend conducting research. So, scientists have to be selective about what new countermeasures are submitted for in-flight testing. Being able to test new ideas on Earth saves invaluable flight time, Neigut said.

So just what exactly goes on while people are lying in bed for a 90-day bed rest study? 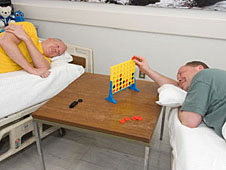 During the 90-day bed rest study, participants do everything in bed, from showering to eating to socializing with other participants. Image Credit: NASA

"They do basically everything in bed, and they're not allowed to get up until the 90 days is over," said Ronita Cromwell, the Flight Analogs Project scientist. "They are allowed to move in bed. We encourage them to use their upper bodies, which mimics the astronauts who rely more on their upper bodies for mobility while in space."

Archuletta said the hardest adjustment for her was not being able to get out of bed and exercise every day. "I always get out of bed and either run, go rollerblading or to the gym," she said. "That's a big change, and I have bottled-up energy in place of all the calories I'm not burning."

Another recent participant, 27-year-old Devin Juel, related the feeling of lying in bed to that of a baby who can't walk. An electrical engineer and machinist from Iowa, Juel said his biggest challenge during the study was depending on someone else and asking for help for nearly everything.

"At first it felt like my head and upper torso was underwater, like under pressure," Juel said. "But after a few days it went away (and felt) normal." 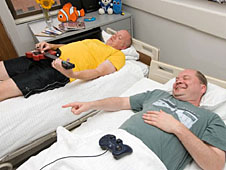 Study participants have access to television, movies, video games, computers and the Internet to help them occupy their time during bed rest studies. Image Credit: NASA

Neigut said the most common misconception is that a bed rest study is a sleep study. It is not a sleep study, and in fact participants are not allowed to sleep during the day. "If you walk though our unit, you will not see people lying around bored," Neigut said. "They're very busy. Their phones are ringing. They're usually enjoying themselves. Sometimes they'll bring musical instruments. ... After a few days it feels very normal to them."

Participants also interact with each other, have televisions in their rooms, and have access to board games, video games, computers and the Internet. Cromwell said the project encourages people to have a goal, such as learning a language or taking an online course.

During Archuletta's bed rest study, the 38-year-old learned sign language and studied for graduate school. "It's all about putting the free time to good use when you can't move around much," she said.

The San Francisco native said the study gave her a good break from her work routine as an information technology specialist and gave her a chance to catch up on her reading. She initially applied for the study just to see what questions were asked on the application.

"When screeners contacted me, I considered it carefully, due to the risks, but finally felt I couldn’t pass up the opportunity!" Archuletta said. "I've always been fascinated by space exploration, launches, NASA artifacts and so on."

She said it was a privilege to help NASA achieve its space goals to go to the moon and beyond. A mission to Mars, for example, would take at least six months just to reach the planet. Astronauts may then live on the surface for 18 months. "When we land on the Red Planet, we need people healthy enough to walk about! ... I imagine what it would be like to see on the news that a manned trip to Mars was successful, and I will get to say, 'When I was young, I was a small part of helping to make that happen.'" 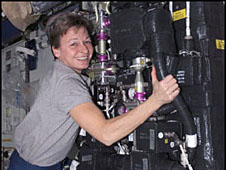 Astronaut Peggy Whitson has spent a total of 377 days in space and currently holds the U.S. record for the most days in space. Image Credit: NASA

Born in 1969 -- the same year as the first moon landing -- Archuletta said she is in awe of how far spaceflight has come and also where it's headed just in her own lifetime.

"When I was a child, going into space for three days was amazing. This last astronaut who stayed in the space station long-term, Garrett Reisman of STS-124, was there for nearly 96 days, and another will soon be going to the ISS (International Space Station) for six months. Two of my 'heroes' are the first female shuttle commander Eileen Collins and also astronaut Peggy Whitson, who holds the American record for spending more than a year of her life (377 days) in space!

"I think sometimes people forget to pause and ponder how truly incredible that is and the dedication it takes. Humans have made such remarkable efforts in terms of exploration, and maybe sometimes we forget how special it is to even have the capability to leave the planet."