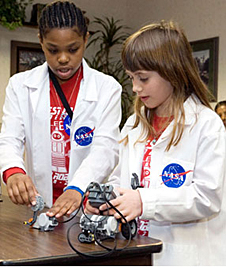 Through the NASA Explorer Schools project, students research and investigate topics in aerospace, reduced gravity, robotics, plant growth in space, living and working in space, and more. They then have the opportunity to share the results of their research projects and experiments with NASA scientists, engineers and education specialists.

One way students share with NASA is through the NASA Explorer Schools National Student Symposium. This year's symposium was held April 29-May 1 at NASA's Johnson Space Center in Houston. Students representing 31 of the 50 current NASA Explorer School teams participated in the 2009 symposium. Students also learned about NASA careers and met NASA astronaut and educator Dottie Metcalf-Lindenburger.

The teachers who mentor students as they complete their NASA investigations say it means a lot to these budding scientists and engineers to be able to report back to NASA about what they're learning. Katie Boyd, science resource teacher at Jacox Elementary School in Norfolk, Va., said the opportunity left her students Jaylen and De'Shawn feeling empowered and inspired. Fifth-graders Jaylen and De'Shawn talked about the lunar plant growth chamber their class had designed and built as part of NASA's Engineering Design Challenge: Lunar Plant Growth Chamber. The project challenges students to design a way to grow plants on the moon and to test their ideas with seeds that were flown in space.

"Both of them felt they could one day find a niche working for NASA, especially after hearing about the different career opportunities that come along!" Boyd said.

While students in Virginia were focusing on growing plants on the lunar surface, students in Alabama were looking at other necessities for lunar living -- water, housing and energy. At the symposium, two seventh-grade girls from Tanner High School in Tanner, Ala., shared their design for a lunar habitat they called "A Girl's Home on the Moon."

Tanner science teacher Julie Meals said students researched what will be needed to live on the moon and then came up with how to meet those needs in a way that would be most comfortable for girls. "They designed sleeping quarters that had sleep suits with zippers built in to the beds so there would be no need for pajamas," Meals said. "They also included a garden room to provide food and oxygen. The habitat would be built in the ground to ward off solar flares and would have solar panels on the roof to provide the energy needs of the habitat.

"They learned about nanotechnology paints that would change (colors) and wanted to incorporate those so that when you want a change of scenery you could change that by touching or adjusting the paint."

Meals said the symposium opportunity was great for the girls because it allowed them to ask questions of experts in different fields and find out more information about lunar habitats. "They are now able to further their research and development of their habitat with the information they received at the symposium," Meals said. "Who knows? One of them may play a major role in developing the actual habitat that is placed on the moon." 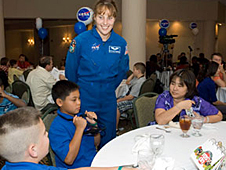 "It sounds easy, but for students who have never conducted a scientific experiment before, this task was arduous and frustrating at times," Nguyen said. "Throughout the process, they stumbled across problems such as not being able to grow seed crystals, varying temperature of the classroom where the solution was stored, and producing crystals that were not clear or did not have smooth sides. The girls did a lot of problem solving and, in the end, learned the scientific process."

"The trip gave them a glimpse of what it is like to experiment and be a scientist -- something they’ve never experienced before. I think it will empower them to seek more challenges and do things they think they could never do."