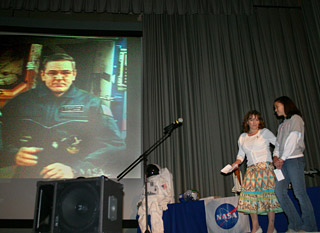 "And that way is the door to outer space." Gesturing casually, International Space Station astronaut Bill McArthur gave a live video tour of his orbiting home as it passed over South America on March 2. McArthur and cosmonaut Valeri Tokarev spoke with more than 300 California students from Branch Elementary School, Edwards Middle School, and Cole Middle School who gathered in the Edwards Air Force Base theater for a special live conversation with the space station's Expedition 12 crew. The two space travelers bobbed weightlessly as they faced the video camera, giving a clue that this was no ordinary place to hold a chat.

Image above: Education specialist Kimberly Irizarry escorted a middle school student to the microphone, hooked up for a chat with astronaut Bill McArthur aboard the International Space Station. Students participating in the program at Edwards Air Force Base saw the astronauts on a large screen live projection. (Photo by Frederick A. Johnsen)

A number of the students from grades six through eight had an opportunity to ask questions of the team in space. Reflecting school science activities in this southern California region that is criss-crossed by earthquake faults, several students asked tremor-related questions. No, the ISS crew said, they cannot see an earthquake in progress from their perch 220 miles overhead. Yes, space-based research on earthquakes has taken place.

McArthur told the audience the record stay in space was about 16 months, set by a Russian cosmonaut. He said astronauts continue to learn about the effects of long-term living in space. Exercise and the psychological boost that comes from long-distance family support and entertainment are important for those who see 16 sunrises and sunsets every day as they wheel around the Earth every 90 minutes. 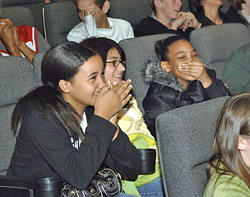 But how does the space station crew keep track of time if they cross every time zone in 90 minutes? They measure the hours in Greenwich time, Tokarev said. (Greenwich time is a constant, and does not shift with time zones. It has been used by world travelers since 1884.)

Image left: Cole Middle School students reacted with laughter as astronaut Bill McArthur somersaulted in weightlessness at the conclusion of his chat with the students. (Photo by Tom Tschida)

McArthur said he and Tokarev look out for each other since they are the only medical aid available in their distant outpost. And when dinner time rolls around, they enjoy "a nice variety of Russian menu items and American menu items," he said.

As the window for the conversation from space drew to a close, McArthur told his young audience: "I'd like you to think about one thing: One of you could be the first human being - the first cosmonaut or astronaut - to land on Mars." At the conclusion of his remarks McArthur completed a slow somersault on camera. As the astronaut reveled in one of the unique opportunities of space travel, the earth-bound students laughed appreciatively and perhaps with a touch of awe.

Edwards and Cole schools are members of the NASA Explorer Schools program, working with the NASA Dryden Flight Research Center located on Edwards Air Force Base. This three-year partnership provides opportunities for NASA and the schools to work together, using the excitement of exploration to inspire students.