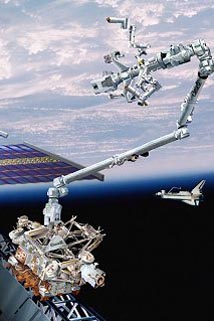 Construction sites have something in common with the International Space Station (ISS). They both use huge cranes to move and relocate large objects that are part of an even larger building project. The cranes used in space, however, are significantly more sophisticated than many of the ones you'll find on Earth.

Canadarm, the robotic arm used on the Space Shuttle to transfer cargo and release satellites, was the first of its kind. Built in Canada and sponsored by the Canadian Space Agency, it can reach and move in ways that humans can't. Canadarm has been such a success that it led to the bigger and better Canadarm2, which is a part of the ISS.

Besides lifting heavy payloads and moving parts of the ISS into place during construction, Canadarm2 assists with docking the Space Shuttle to the Space Station. While the Canadarm on the Shuttle can reach and move with flexibility, the ISS arm can also move end over end in an inchworm-like movement to reach many parts of the ISS. As the Station grows ever larger, this is a feature that will come in handy. 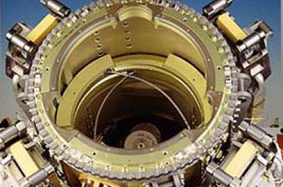 Canadarm2 receives its power from Power Data Grapple Fixtures (PDGF) on the ISS, which are much like electrical outlets spaced throughout homes on Earth. Canadarm2 can move anywhere that a PDGF is available. Because it uses the PDGF for power, the arm isn't permanently mounted to one particular spot on the Station. Latching End Effectors (LEEs) at each end of the arm provide power, data, and video signals to the arm when connected to the PDGF. Imagine someone running a vacuum cleaner in the house and unplugging it when moving from room to room. That's something like what happens with the Canadarm2 on the ISS.

The crane is called a robotic arm for several good reasons. Just as a human arm lifts heavy objects, the Canadarm2 uses its joints to create a flexible range of motion, rather than merely moving up and down. In the ISS crane, there are three joints similar to shoulder joints, one elbow-like joint, and three wrists. Depending on the task it is performing, Canadarm2 moves at variable speeds. When unloaded, it moves at 37 centimeters [cm] (1.21 feet) per second. When helping with space walk support, it hums along at 15 cm (5.9 inches [.in]) per second. When assembling portions of the ISS, the speed is a slow 2 cm (.79 in.) per second, and when helping to dock a Space Shuttle Orbiter, it slows even more to 1.2 cm (.47 in.) per second. 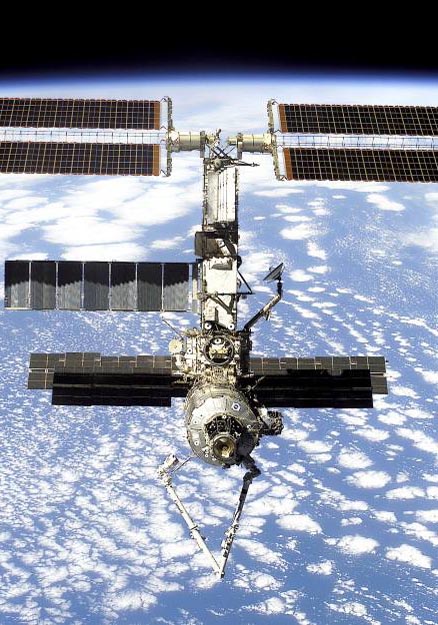 That may sound slow, but keep in mind that the Canadarm2 is a large machine. It's 17.6 meters (57.7 feet) long when fully extended, weighs 1,800 kilograms [kg] (3,968 pounds [lbs]) and can work with up to 116,000 kg (255,736 lbs) of work. The structure is made of 19 layers of high-strength, temperature resistant carbon fiber called thermoplastic. The robotic arm has force-movement sensors that provide a sense of touch so that astronauts can tell the force with which the arm comes into contact with various objects. There are four cameras, located at each side of the elbow and on the LEEs. This enormous moving crane can be controlled autonomously or by astronauts.

It certainly makes sense to have an enormous, sophisticated, automated crane to help construct the ISS. After all, this is the biggest construction job in the universe. Would you expect anything less?