Grow Text SizeShrink Text Size
Junk Yard Genius
Three years ago, Pinon Middle School science teacher Rochelle Silvers asked her seventh-grade students if anyone would like to do a science project for the state science fair. The only student to raise his hand was Garrett Yazzie.

Garrett, a Navajo Indian, volunteered because no one else did, and because he was excited about the possibility of a trip off the Indian reservation where he lived. 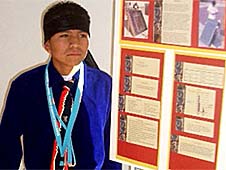 For his project, Garrett made a solar-powered water heater out of aluminum cans and a car radiator from an old Pontiac, which he had found at a junk yard. The result was not just an experiment for the science fair but an invention used in Garrett's home.

At the time, 13-year-old Garrett was living with his mother, two sisters and two nephews in a trailer on the Navajo Indian Reservation in Arizona. The trailer, like many homes on the reservation, did not have running water or electricity. Garrett used his heater to heat well water for bathing and to heat his home. According to Garrett's data, his invention can heat water to 200 degrees Fahrenheit and raise the air temperature by 45 degrees Fahrenheit.

The environmentally friendly heater helped the Yazzie family in another way. Before the heater, Garrett's family was heating the home by burning coal or wood. The smoke from burning those materials was causing Garrett's younger sister to have respiratory problems, sometimes requiring treatment at a hospital.

"I wanted to find a way to heat the house without affecting her health," Garrett said. The solar-powered heater meant Garrett's family no longer had to burn coal or wood to heat their home.

The impact of the project was just beginning. The "junk yard genius," as he's known on the reservation, won first place in the engineering category at the 2005 Arizona American Indian Science and Engineering Fair and earned an invitation to the Discovery Channel Young Science Challenge. Out of more than 7,500 nominations, Garrett was selected as one of 40 finalists to attend the challenge in Washington, D.C., in October 2005.

Garrett's solar-powered water heater placed seventh in the Discovery Channel Challenge. But the people Garrett and his mom, Georgia, met at the Discovery Channel event have changed his life. He is now attending a preparatory school in Michigan and has a scholarship to Arizona State University waiting for him when he graduates. In 2007, the whole family received a new home through the ABC television network's "Extreme Makeover: Home Edition."

Yazzie, now 16, lives with the Pierz family in Clarkston, Mich., and is a sophomore at Orchard Lake St. Mary's Preparatory School, a Catholic college-preparatory high school for boys. The Yazzies met Michael and Kathleen Pierz at the Discovery Channel Challenge, where their daughter was also a finalist.

Kathleen Pierz talked with Garrett's mom about her desire to move Garrett off of the reservation to attend school. Pierz said she felt compelled to invite Garrett to live with her family and attend St. Mary's. Two weeks later, Garrett moved to Michigan.

Garrett has always enjoyed math, but as a result of the project, he now enjoys science and seeing how things work. "After getting through my science fair project and working with different engineers and scientists, I like science more than any other subject," he said.

He has done several other projects, including building a water wheel. The invention uses an industrial-sized cable spool connected to a 10-speed bicycle. When the spool is inserted into a stream of water, the spool spins and turns the bicycle axle. An alternator on the bicycle collects the energy that is created when the axle rotates. The water wheel provided enough electricity to run a refrigerator and the lights in a mountain home. This project won first place at the 2006 Arizona American Indian Science and Engineering Fair and placed Garrett as a semi-finalist once again in the Discovery Channel Young Scientist Challenge.

Garrett said he's still shocked that a piece of junk like a 45-year-old radiator could impact his life so much. "It's been a big enjoyment to my life," he said of all the good things that have happened to him since the initial science project.

He also has his sights set on the moon. During a visit to the Henry Ford Museum, Garrett toured the "History of Invention," which is an exhibit of famous inventors' homes, such as the home where George Washington Carver was born. Garrett told Kathleen Pierz the museum would need to make room for a hogan (a six-sided traditional Navajo home) to represent him, because he is going to be the first Navajo on the moon. "I know I will have to work very hard at that," he said.