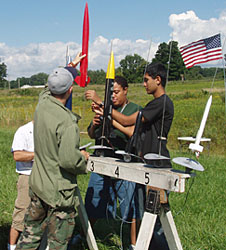 Students gained experience by building and launching their own rockets. Image Credit: NASA

When a group of Ohio students, transporting the soda-can-sized results of their labor, passed a sign that said "Welcome to Nowhere," they knew they were near their destination.

The students, who attend high school in Cleveland, were participants in a NASA education project.

The soda-can-sized objects were CanSats, sensor payloads that can be flown on small amateur rockets to altitudes of over two miles.

And the sign declaring they were "Nowhere" is in Empire, Nev., one town away from the students' destination -- a rocket launch site in Nevada's Black Rock Desert.

Several groups of students traveled to the Black Rock Desert for a project called A Rocket Launch for International Student Satellites. ARLISS partners students and amateur rocketry enthusiasts to build and launch CanSats, providing the students with experience in science, technology, engineering and mathematics. The project is a collaboration between Stanford University's Space Systems Development Program and other educational institutions.

The Cleveland students were participants in NASA's Science, Engineering, Mathematics and Aerospace Academy, which engages K-12 students in exciting, hands-on activities that encompass the research and technology of NASA's missions. SEMAA supports NASA's educational goal of attracting and retaining students in technical disciplines. SEMAA operates in 14 locations throughout 11 states and the District of Columbia The project offers activities during the academic year and summer, all at no cost to participants.

Tim Dedula, from the Educational Programs Office at NASA's Glenn Research Center in Cleveland, coordinated the ARLISS project for students at the SEMAA location at Cuyahoga Community College in Cleveland. Six students there applied to participate in ARLISS. Receiving help along the way from experts at Glenn Research Center, the students worked together to build a pair of identical CanSats. The students' CanSats included sensors to measure air pressure, temperature and humidity.

After programming the CanSats' software, the students conducted a test launch at NASA's Plum Brook Station in Sandusky, Ohio. They used a rocket built by Dan Vento, an engineer at Glenn who is also a member of a local rocketry club. Although the students did not have to build a rocket to launch the CanSat, project organizers gave them the opportunity to build smaller model rockets so that the participants could gain additional rocketry experience. 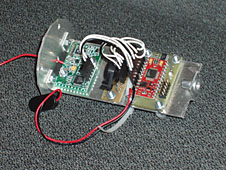 Finally, the time came for the students to travel to the desert for the ARLISS event. Traveling with them was Steve Hall, a software engineer from Glenn who provided his technical expertise during the CanSat flights.

Over the course of three launches of their CanSats, the students discovered that when it comes to rocket science, there are two ways to learn -- from the things that go right and from the things that go wrong. On the first launch, a computer error caused the telemetry data from the sensors to be lost. On the second, the CanSat stopped transmitting telemetry data shortly after launch. Not only was the data lost, but so was the CanSat. The team was unable to track it down. For the third launch, however, the second CanSat recorded the telemetry properly. The group's efforts were successful.

The ARLISS project was an excellent example of SEMAA's mission -- providing tomorrow's scientists and engineers with experience that will prepare them for their future careers. Not only were the students themselves inspired by the experience, but when they returned to school after their trip, they had exciting stories to tell that brought science, technology, engineering and mathematics to life for their classmates. Of course, the students could also give the short answer to where they'd been: "Nowhere."