Lunar Legacy
Engineer Mike Selby has experienced the NASA Great Moonbuggy Race from two perspectives: as a student competitor and as a volunteer helping make the race happen. 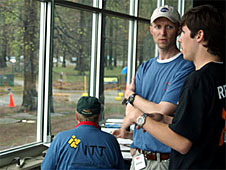 In the mid-1990s, Selby was a student at the University of Alabama in Huntsville helping design and construct a vehicle to traverse the simulated lunar surface at the NASA Great Moonbuggy Race. He was also a co-op student at NASA's Marshall Space Flight Center in Huntsville, Ala., which organizes the annual race.

"This competition, and others that are similar, give the students a tremendous amount of hands-on, practical, real-world experience that cannot be found in the classroom," Selby said. "Whether they have turned wrenches, welded components together, raised funding or written reports, it is all experience that will serve them well once they enter the workforce."

Selby has worked as an obstacle judge, timer and scorekeeper, and for the last several years he has served as the lead of the scorekeeping team. He has watched the event grow tremendously in the last 15 years, from eight college teams in the event's first year to a total of 47 competing high school and college teams in 2008.

Selby said competing in the moonbuggy race taught him valuable lessons in scheduling and time management. "We were so far behind finishing our buggy in 1996 that a weather delay for a tornado warning the morning of the race allowed us the extra time that we needed to finish our buggy," he recalled. 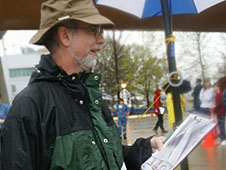 Dennis Gallagher's job at the race is to help facilitate moving teams from their pit area to the starting line. Image Credit: NASA

"We were very fortunate to do as well as we did those years. The competition has advanced so much since then that it would be very unlikely that we could go down to the wire building our vehicle like that and still finish in the top two. You must be able to finish your vehicle early enough to test and find any design issues that you may have."

Dennis Gallagher is another volunteer who has been involved in the race since its start. The deputy manager of the Space Science Office at Marshall started as a crossing guard and obstacle judge. He even brought his children out to work at the race a few times. As the number of competitors has grown, Gallagher saw a need for someone to help smooth the transition from teams' pit areas to the starting line so that every team would have time to attempt two runs at the course. "I'm really just happy to contribute wherever I can be useful, and lately that has been helping to coordinate queuing buggies into the judging and race," Gallagher said.

What makes the race so enjoyable for Gallagher is seeing what students have created and observing the hard work they put in, before and during the race. "I have received feedback from teacher and parent mentors that the experience working as a team to design and race moonbuggies often leads or further encourages students to seek engineering degrees in college," Gallagher said. "The race appears to have provided a goal-oriented learning experience for educators to use with students and for students to use to broaden their ability to see themselves in a career doing engineering and other fields inside and outside NASA." 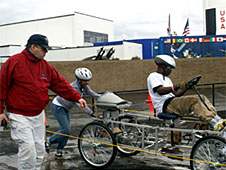 Tom Hancock served as an obstacle judge at the 2008 race. Image Credit: NASA

Tom Hancock has worked at the race since its start 15 years ago and served in just about every role possible, from obstacle judge to safety monitor to master of ceremonies. Hancock said he serves with the future of space exploration on his mind.

"Critical to future space exploration is getting young people involved and thinking in new ways to solve difficult engineering and design problems," Hancock said. "The moonbuggy race does that. Some of the people competing may go to Mars one day."

Hancock is the Ares I vehicle integration team lead for Jacobs, a company currently supporting the development of the Ares I crew launch vehicle that will launch humans into space on their way back to the moon. He said the race is an opportunity for students to apply what they learn in the classroom in a real engineering scenario. "This is the first time many have tried to apply classroom or lab education to a real engineering challenge," he said. "It realigns a student's thinking to better function in the real world."

The Great Moonbuggy Race supports NASA's goals of attracting and retaining students in science, technology, engineering and mathematics, and of strengthening the agency's and the nation's future workforce.