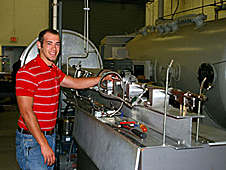 NASA and scouting have a long history. More than two-thirds of all current and former astronauts have been involved in scouting. Of the 312 pilots and scientists selected as astronauts since 1959, at least 207 have been identified as having been scouts or active in scouting. The list includes 39 Eagle Scouts, 25 Life Scouts, 14 Star Scouts, 26 First Class Scouts, 17 Second Class Scouts, 13 Tenderfoot Scouts, three Explorers, 25 Cub Scouts, 10 Webelos Scouts, one King’s Scout, two Wolf Scouts, and 32 with unknown ranks, including 27 who were Girl Scouts.

The leadership, teamwork, life skills and positive role models that are part of scouting help create motivated, high-achieving adults who may go on to become astronauts, scientists or engineers. In a few years, today's scouts could be among the next generation of pioneers that may help lead the world's activities for better understanding Earth and for exploring space. 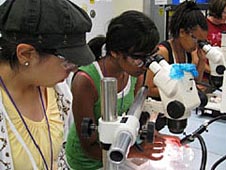 NASA supports Boy Scouts and Girl Scouts as part of its goal for engaging Americans in NASA missions.

A former astronaut and, currently the NASA Administrator, Charles F. Bolden Jr. is also a former Boy Scout. He recognizes firsthand the tremendous amount of hard work and dedication that is necessary to achieve these honors. Administrator Bolden believes scout participation provides the foundation for what will be a lifetime of exploration and adventure. He is very proud that many of NASA's scientists, engineers and astronauts began their journey of exploration and discovery during their participation in scouting.

Both awards represent the pinnacle of scouting achievement. Most kids join scouting when they are in elementary school. As they progress through the ranks, scouts earn badges, pins and awards for mastering skills and developing character. Scouting activities are liberally sprinkled with fun and teamwork, and the scouts regularly complete activities that challenge their abilities and stretch their limits. To earn the prestigious rank of Eagle Scout or Gold Award, however, a scout must go beyond the earlier challenges and develop a project that benefits the community or creates a needed change. It's a project that involves networking, planning and resourcefulness, and by the time the goal is met, the scouts are worthy of joining the ranks of those before them.