Grow Text SizeShrink Text Size
Holding a Winning Hand
When Peter Homer sat down to build a better astronaut glove, he started with the fingers. 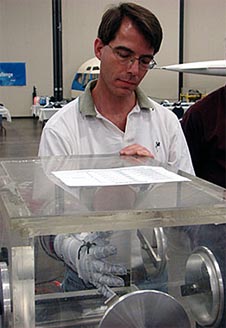 "I'm just going to try to design a finger, build a finger that is easy to bend," Homer recalled thinking.

Months earlier, NASA astronaut Carl Walz had talked about the problems with astronaut gloves, particularly the joints and the fingers' flexibility, at a meeting introducing Homer and others to NASA's Centennial Challenges and the challenge to build a better astronaut glove.

Homer and the other competitors had the opportunity to put their hand inside a pressurized astronaut glove to feel for themselves the restrictions.

"It wasn't like I thought it would be," Homer said. "The glove is rigid when it is pressurized. It was surprising to me because intellectually four psi (pounds per square inch) doesn't seem like that much. I was surprised at how much of a rigid shell it became."

With his hand inside the pressurized Phase VI glove used currently by astronauts during spacewalks, Homer tried to curl his fingers. "I was surprised at how difficult that was," he said. "It was the Phase VI. It was the latest and greatest, and I was surprised."

Homer, a former aerospace engineer from Southwest Harbor, Maine, took notes about which finger joints were easy to move and which ones were difficult. For the next eight months, he prepared for the challenge by thinking about the problems and of potential ways to address them. In January 2007 -- five months before the contest deadline -- he began to design and then build his glove, starting with the fingers.

The fingers he designed are what ultimately resulted in Homer's winning $200,000 and becoming the first person to win one of NASA's Centennial Challenges. The project, initiated in 2004 and currently managed under NASA's Innovative Partnerships Program Office, awards cash prizes for innovations in space exploration and engages Americans in NASA missions. The seven challenges, which include building a personal air vehicle and a lunar lander, make awards based on actual achievements, instead of proposals.

The astronaut glove challenge was administered by Volanz Aerospace Inc. and sponsored by Hamilton Sundstrand, NASA's prime contractor for the current spacesuit, and ILC Dover.

The challenge required competitors to build two prototypes of their own design to compete against each other's designs and the Phase VI glove in three tests. In the first test, the gloves were subjected to a burst test. Competitors then used their glove to perform several dexterity tasks within a specified time in a depressurized glove box. The final test measured the force required to move the gloves' fingers and thumb.

Entrants' gloves not only had to beat their competitors' gloves but had to perform better than the Phase VI to win a prize.

Homer hoped initially to come up with a radically different design from the current glove. "I thought the way to beat the current glove was to build something very different," he said. "But it's interesting that I wound up with a design very close to what they are now."

The knuckle frame is made from steel rods heated and bent to shape. The wrist is formed from sheets of aluminum. The bladder, or lining, is a thick latex glove like those used in the chemical industry. 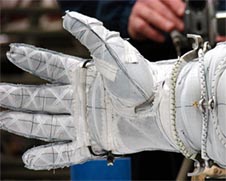 The glove itself is made of ripstop Dacron, a fabric common in sails and kites. Dacron is also used in the thermal insulation layers of the International Space Station.

The key difference in Homer's glove and the Phase VI is Homer's finger joints. He crisscrossed one-eighth-inch craft ribbon into an "X" at each finger joint to create a hinge-like effect. The hinge helped to improve the fingers' dexterity.

"When they measured the force it actually took to move the fingers, it was easier to bend my fingers than it was the Phase VI glove," Homer said.

Once he was satisfied with the finger design, he moved down the glove to the knuckle joint, the thumb and finally the wrist. He created each section as four individual pieces and put them together into the final design the weekend before the contest. "Getting the design refined so it could be put together that quickly was part of the process of simplifying the design, the iterative process," Homer said.

Homer's design was so fine-tuned he was able to construct the second glove in just two days.

"What's interesting about this challenge is you had to make the glove," he said. "It's not just how good of a designer you are or how good an engineer you are, but you have to make this. You can have a great design, but if you can't make it or you can’t make it easily, then it's not great."

Homer said he relied on knowledge and skills learned throughout his career as he prepared for the challenge.

He has a bachelor's degree in mechanical engineering and a master's degree in aerospace engineering. His career has included designing experiments for the space shuttle for Grumman Aerospace as part of a Strategic Defense Initiative to develop space-based radar systems. He also helped design communication satellites and spacecraft structures for General Electric Astro Space, now Lockheed Martin Space Systems Division.

Working on these projects gave Homer hands-on experience in engineering, but he said he learned the most from the people he worked with. "The folks that I worked with early on ... a lot of them were the guys who worked on the Apollo program," Homer said. "I was learning from and hearing stories by the guys who built the lunar module."

He said the Apollo-era veterans taught him to design knowing that the safety of someone else's life was in his hands.

Later in his career, Homer led the development of the structure subsystem for the A2100 satellite, a modular spacecraft platform customizable to accommodate a range of missions. Homer said his approach to the glove challenge was similar to the way his company approached the A2100 project. 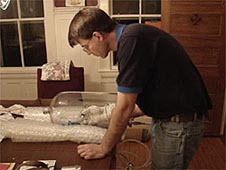 "The A2100 program was the first time our company said, 'Let's take a step back, and let's forget everything we know about how to design a satellite and start over with a clean piece of paper,'" Homer said. "Some of that (experience) played into my approach with the glove."

Homer also has worked as a sail-maker, crafting sails for Maine's popular sailboat industry. He learned to sew in an eighth-grade home economics class. Homer grew up on the water, learning to sail and working at a boatyard while in high school and college.

"I was able to take some of that knowledge and reconfigure it to something like a glove," he said. "I was able to apply my knowledge about fabric tension and understanding fabric orientations so when it is pressurized it looks like a hand. A pressurized glove is a whole different thing than a regular glove, and you have to think about it differently. The order you put it together is important. That was something I became familiar with in the aerospace world."

Homer involved his three children, ages 15, 11 and 6, in the challenge. His 14-year-old son Matthew documented the project with videos and photos and accompanied his dad at the competition. "One of the things I wanted to show them is that if you set your mind to something, you can do just about anything," he said. "I didn't know if I was going to win the contest or not, but I wanted them to see me see it through."

Homer won the 2007 event, but the challenge to build a better astronaut glove is not over. The prize money offered for the 2008 challenge totals $400,000.

The challenge is not over for Homer, either. "I see another two years of improving my design through the competition format, advancing toward flight-worthy hardware and pushing the bar up each year," he said. "I will have to take my design a little further than it is now in order for it be worthy of NASA spending money on it." 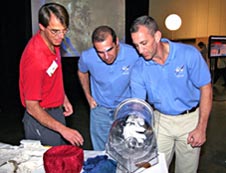 Homer showcased his design in September at Wired magazine's NextFest and got positive feedback about his design from NASA astronauts. STS-118 Commander Scott Kelly, Pilot Charlie Hobaugh and Mission Specialist Rick Mastracchio (who performed three spacewalks during the mission) tested out Homer's glove in a homemade pressurized glove box.

"They all gave it a 'thumbs up' for finger dexterity, confirming the effectiveness of my design," Homer said.

Homer said he hopes NASA will continue to involve the public in space exploration through projects like Centennial Challenges.

"I definitely think that's something they ought to pursue more of," he said. "I'm not an anomaly. I'm not just one guy out here. There are lots of people like me who have the training, background and experience, and who, for whatever reason, are not in the industry but who are interested in contributing in some way. There are lots of really intelligent people who can contribute in the way that I hope to contribute by bringing new ideas in a way that NASA can take them over and bring them into their programs."