Hammin’ It Up
A satellite with amateur radio capabilities and a student-designed experiment was released into orbit around Earth on Aug. 3, 2011, during a spacewalk outside the International Space Station. The satellite is transmitting signals containing information that students around the world can access.

The Amateur Radio on the International Space Station Satellite-1, or ARISSat-1, is a follow-on project to the unique SuitSat-1. SuitSat-1 was an amateur radio transmitter fitted into a surplus Russian Orlan spacesuit that was released from the station into space in 2006. SuitSat-1 transmitted for about two weeks and orbited Earth for seven months before burning up in Earth’s atmosphere. 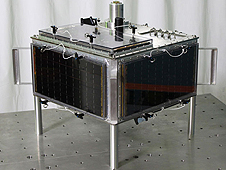 The rectangular ARISSat-1 is covered by six solar panels that will charge the batteries in the satellite for about six months as it orbits Earth. Credit: AMSAT

Formerly known as SuitSat-2 and also called Radioskaf-V and Kedr by the project’s Russian partners, ARISSat-1 contains a student-designed experiment and other equipment that students can use to learn more about space and space exploration. ("Kedr," which is Russian for "Cedar" in English, was the call sign of Yuri Gagarin, a Russian cosmonaut and the first human in space.)

ARISSat-1 is a project by the Radio Amateur Satellite Corporation, or AMSAT, and affiliated with the Amateur Radio on the International Space Station. ARISS is an education activity where space station astronauts and cosmonauts use amateur radio equipment aboard the space station to talk with students around the world.

The development, launch and deployment of ARISSat-1 are being conducted as an educational mission with the support of the NASA Office of Education’s ISS National Lab Education Project and RSC-Energia. It is the first of a series of educational satellites planned for deployment from the space station. Future satellites will carry additional student-built experiments, which will have data sent to the ground via amateur radio signals.

AMSAT ARISSat-1 project manager Gould Smith said the educational mission of the project is to use the unique aspects of satellites and amateur radio transmissions to generate student interest in space, science, technology, engineering and mathematics.

ARISSat-1 traveled to the space station in late January aboard a Russian Progress cargo vehicle and was released into space during a spacewalk by Russian cosmonauts Sergei Volkov and Alexander Samokutyaev.

For ARISSat-1, the onboard experiment is from Kursk State Technical University in Kursk, Russia. The experiment is going to measure the vacuum in space at different altitudes as the satellite’s orbit decays, gathering 90 minutes of data each day and transmitting that data continuously back to Earth. By analyzing these data, student scientists can derive atmospheric density from in situ measurements. These data in turn can be used to better predict the orbital lifetime of ARISSat-1. 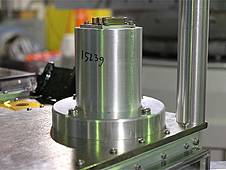 Aboard ARISSat-1 is an experiment that will measure the vacuum in space at different altitudes as the spacecraft de-orbits. Credit: AMSAT

Originally designed -- like its predecessor -- to fit inside an Orlan spacesuit, ARISSat-1 was redesigned when the expired spacesuit allocated for the project was disposed of sooner than AMSAT could use it. The redesign actually turned out to be a good move for the project, project managers said, because it allowed capabilities to be expanded.

The rectangular spacecraft is covered by six solar panels that will charge the batteries in the satellite for about six months as it orbits Earth. Spoken telemetry values, with data such as temperature and battery life, are intended to promote science and mathematics education by encouraging schoolchildren to listen to the satellite, track its progress and plot the changes. AMSAT president Barry Baines said it’s a great opportunity for students to do actual science, by taking real-time, practical readings on a daily basis and plotting the changes. The telemetry data will be available live and over the Internet for schools and radio amateurs to study the operation and changes that the satellite experiences during its orbits around Earth.

The project website provides free downloadable software that can be used to decode the data. "They can look at all the values, but you can also get the Russian experiment data at the same time and actually look at that every day," Baines said. "Plus, that data will be stored online, and they will be able to access it via the Internet to be able to go back and look at historical data or just use it in a lesson to actually take the real data and analyze it."

"The most useful, exciting and effective element of learning in regards to this project is actually doing something hands-on and practical, rather than just sitting and listening to a lecture. If you can actually go out and collect the data and then do something with it, that’s a lesson that’s learned and understood at higher cognitive levels."

In addition to data, the satellite will transmit 24 pre-recorded greetings in 15 different languages -- French, Spanish, German, English and Chinese, to name a few. More than half of the messages were recorded by schoolchildren, Smith said. "Most of them are really creative and interesting to listen to, especially male and female voices, and even kind of a little rap by the Dutch group. Also, most of them have a secret word at the end, and there’s a contest: If you can identify the secret word and send an e-mail, we’ll return an e-mail back to you with a little certificate."

Attached to the inside of the satellite is a memory card containing images and documents from children around the world. A website has been set up to view the files on the card. There is also a contest to see who correctly copies the most Morse Code signals sent by ARISSat-1. The signals will consist of the call signs of all amateur radio operators who worked on the project. Additionally, still images of Earth will be transmitted from four cameras aboard the satellite. ARISSat-1 also will serve as an orbital communications relay station for use by amateur radio operators around the world. The ARISSat-1 website lists all of the ARISSat-1 contests and challenges.

Helping with the project is NASA retiree Lou McFadin. McFadin has been closely involved with amateur radio and human spaceflight through the Shuttle Amateur Radio Experiment, or SAREX, project, beginning with astronaut Owen Garriott’s first amateur radio communications on the STS-9 shuttle mission in 1983. McFadin is the ARISS hardware manager and has worked with the development of the ARISSat-1 hardware since the start of the project.

"I think if they (students) do the telemetry decode," McFadin said, "there’s a lot of opportunity for learning there. It has solar panel temperatures; it has solar panel data; it has battery voltage and all kinds of information there about what’s going on in the satellite. That kind of learning really connects to our goal of getting children and all Americans interested in space. That’s a big part of what we wanted to do." 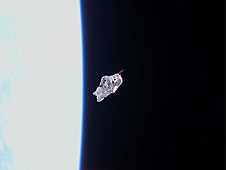 SuitSat-1 in orbit after its release from the International Space Station during Expedition 12. Credit: NASA

ARISSat-1 also will serve as a technology demonstration. "For AMSAT, it certainly was a way to try out some new ideas -- how to build the structure for the dynamics of the satellite itself, it’s a new power system, it’s a new transponder system we’ve not tried before, it’s the first time we’ve flown a software-defined transponder, and it’s paving the path for the future for us," Smith said.

This was AMSAT’s second opportunity to release a satellite from the International Space Station, and Smith said they hope to continue the project with future spacecraft and more student-designed experiments. "It’s not any harder to build four of something than it is to build one, hardly. So we built four space frames, five actually, one for the prototype, and we built four flight versions," Smith said. "So it’ll be easy to do this again."

Mark Severance, manager for the ISS National Laboratory Education Project, sees ARISSat-1 as an important flight test for future educational satellites. "Future ARISSats will carry at least four student-designed and -built experiments," Severance noted. "This will give students the opportunity to go hands-on and build actual spaceflight experiment hardware. Furthermore, they can track the satellite using off-the-shelf amateur radio hardware and obtain the data from their experiment directly from their own ground station. In this manner, ARISSat can provide an 'end-to-end' space mission experience for participating students."

NASA's Office of Education's ISS National Laboratory Project will sponsor future ARISSats. The project provides hands-on opportunities for elementary, secondary and university students, as well as lifelong learners, to participate in the space station mission. The ARISS school contact activity is supported by the ISS National Laboratory Project as well as the Teaching From Space Office at NASA's Johnson Space Center in Houston. Teaching From Space facilitates education opportunities like ARISS that use the unique environment of space to increase student interest in science, technology, engineering and mathematics.

Check out the ARISSat-1 website at http://arissat1.org/  → for information on data transmissions, contests and student activities.