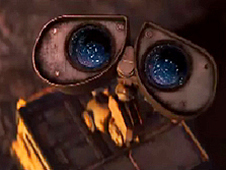 NASA and Disney are working together to create a series of educational and public outreach activities related to Disney/Pixar's new movie "WALL-E," opening in theaters nationwide on June 27, 2008.

The collaboration highlights the similarities between the movie's storyline and NASA's real-life work in robot technology, propulsion systems and astrophysics. The film is set 700 years into the future. The main character, WALL-E, is the only rover-robot left on Earth. He meets a new robot named Eve, and together they take a journey into space.

One of the educational activities WALL-E will participate in is with NASA's Digital Learning Network. Through videoconferencing and live webcasts, DLN modules bring NASA content into the classroom. WALL-E is going to make a special appearance in a DLN episode this fall.

"WALL-E is going to be a guest host to help us teach about NASA's satellite mission to the moon, the Lunar Reconnaissance Orbiter," said Marci Delaney, the DLN team lead at NASA's Goddard Space Flight Center.

The Lunar Reconnaissance Orbiter, or LRO, is a robotic spacecraft that is scheduled to launch in the fall of 2008. The spacecraft will orbit the moon, and its six different instruments will take images and gather information about the moon's surface. The mission is NASA's first step toward returning humans to the moon.

Delaney said the DLN module will include a hands-on activity on Light Detection and Ranging, or LIDAR. This kind of technology will be used by one of the tools on LRO to gather data about the high and low points on the moon. NASA will use that information to create 3-D, topographic maps of the moon. Students will learn how to measure the amount of time it takes for a laser beam to strike a surface and bounce back, calculate the data, and create a topographic map.

The robotics DLN episode featuring WALL-E will be available on the DLN Web site this fall. Videos featuring the character will also be added to the NASA Kids' Club.

"Great ideas for future exploration of the universe start with the imagination," said Robert Hopkins, chief of strategic communications at NASA Headquarters in Washington, D.C. "We hope that with the help of our new robot friend WALL-E, NASA can encourage young people to learn about science and technology and become the explorers of tomorrow."