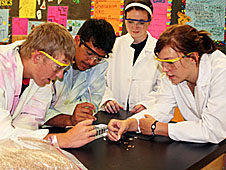 Students Brandon, Dustin, Bailey and Connor prepare wheat for an experiment on Earth parallel to the one on space shuttle Atlantis. Image Credit: SSEP

For the third time in 2011, a space shuttle sat on the launch pad awaiting its final flight. This time it was the space shuttle Atlantis. On board was a very special payload: experiments created by students from 11 communities from across the United States. The experiments are part of the Student Spaceflight Experiments Program, or SSEP.

In December 2010, the call went out for communities across the U.S. interested in holding design competitions to fly real experiments aboard Atlantis. The selected experiments would be flown in a research mini-laboratory stowed in a mid-deck locker. By the start of the program in January 2011, 11 communities had answered the call, which gave 11,000 students in grades 5-12 the opportunity to participate. Student teams submitted 530 proposals, from which 11 experiments were selected for flight -- one for each community.

The National Center for Earth and Space Science Education, or NCESSE, in partnership with NanoRacks LLC, sponsors the Student Spaceflight Experiments Program. In addition to the 11 communities sending experiments up on Atlantis, 16 student experiments were flown on space shuttle Endeavour in May. The program is blazing a new trail in commercial space. It is the first pre-college science, technology, engineering and mathematics, or STEM, education program that is both a U.S. national initiative and implemented as an orbital commercial space venture. The program is made possible through a Space Act Agreement between NanoRacks and NASA as part of an effort to use the International Space Station as a national laboratory.

The SSEP efforts won't retire with the Space Shuttle Program. NCESSE and NanoRacks have recently announced routine SSEP operations on the International Space Station starting in September 2011. Communities interested in this keystone STEM education program are invited to come aboard "America's National Laboratory" in orbit -- one of humankind's most remarkable engineering achievements. SSEP on the space station is open to school districts for grades 5-12, two-year community colleges and four-year colleges and universities with special emphasis on underserved communities. SSEP also is available to communities in Canada, Japan and European Union nations through NCESSE’s new international Arthur C. Clarke Institute for Space Education.

If your community is interested in being part of this adventure on the high frontier and engaging hundreds to thousands of your students in real science as they vie for an experiment slot on the space station, contact NCESSE Director Jeff Goldstein (jeffgoldstein@ncesse.org). Communities must apply during summer 2011 for the 2011-2012 academic year program. The experiment design competition is in fall 2011, and the flight to the space station will be in spring 2012.

"The SSEP is a model program for engaging students in the NASA mission in a hands-on manner," says Mark Severance, NASA education projects manager for the International Space Station National Laboratory. "The real-world experience these student scientists will gain by developing actual flight experiments will be invaluable to their science and technology educational development. We look forward to working with NCESSE and NanoRacks to host future iterations of SSEP on the NanoRacks platform on board the International Space Station."

Below are links to stories written by representatives of the 11 communities that sent experiments to space aboard space shuttle Atlantis. Read how the SSEP impacted the lives of many students, parents, teachers and communities. The mission patches below were selected from 974 designs submitted by students. The patches are flying with the experiments on STS-135.

Read about the 16 student experiments that flew on space shuttle Endeavour during the STS-134 mission.
› One Last Endeavour